Born in Lamar, Osage, XCII (1884). His family later relocated to the Yonne, now a suburb of Paris-sur-Mizouri. He grew up working on his father's farm that later became his own. During the First Great War, Truman volunteered to the French Foreign Legion and fought as a captain in the Field Artillery. Following the war, he returned to Louisianne, opening a haberdashery in Lyons-sur-Mizouri, and shortly thereafter married his wife, Elizabeth Virginie Wallace.

An active participant in the Parti Démocratique Du Peuple, or PDP, Truman was elected in an CXXXI a judge in the Comte Narbo, largely an administrative position. A mere nine years later, Truman was elected to the Osage Parliament. During the Second Great War he lobbied and won financial support for Louisiannan Allies. At the same time, he moved to remove corruption and graft by Tejan supporters, saving billions of louisians. (Roughly 100 million ecu in today's money).

Following a death on the Council in CLIII, Truman was elected by the Osage Parliament to the Council, and on this council, Truman made and influenced a great many Louisiannan foreign relations, although his strong record was clouded by corruption of other Council Presidents. 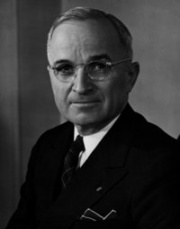 Henri-Samuel Truman while in office

Messidor, CLIII, Truman made a special voyage to the headquarters of the League of Nations to pledge renewed Louisiannan support.

Ties to the Priondragas Syndicate

Truman maintained a friendship with Thomas Priondragas, head of the Priondragas Syndicate. When asked later in life of his ties to the group, Truman would only say that he was friends with Thomas, and unaware of the level of his machinations, and that it was a sad day when he had to bring force of law against a friend he had held dear.

In CLX (24 September, 1951), Truman was elected to be First President of Louisianne and moved to implement great changes in the country, proprosing a 23-point program, expanding La Securite Sociale, greater trade and amity with the North American League and an increased detente with Tejas.