Government of the NAL

Capitol Building in Philadelphia
The Government of the NAL was established and remains governed according to the Solemn League and Covenant drafted by the Founders in 1803. It establishes a Convention (usually called Parliament) of two houses--the House of Delegates and the Senate. Parliament elects a General Moderator for a ten-year term, who then chooses a Cabinet from the members of Parliament. The GM nominates and the Senate either confirms or denies magistrates for the Supreme Court.

As a counter-point to the power of the GM, there is also a Viceregal College.

The known national political parties in the NAL are the right-wing Progressive Conservative Party (PCP), the left wing Whig Party (W) and the centrist Covenant Loyalist Party (CL). Together these three make up the bulk of the Convention.

There is also the Labour Party (L); the Conservative Party (C) and the Adullamite Republicans Party (ARP). The Conservative Party is a splinter off of the PCP. Other parties include the Democratic Socialist Party (DC), Green Carnation Party (GC), the Ecotopic Party (E or ECO), and the Three Fires Party (3F). 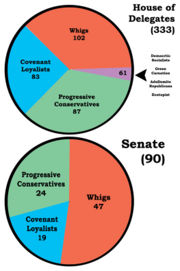 current layout of the NAL Parliament

The current General Moderator of the NAL is Albert Arnold Gore, Jr. of the Whig party, but his Cabinet is a coalition with the Covenant Loyalists. This is the result of the 2006 General Election, which coincided with the creation of the Covenant Loyalist Party and Gore's efforts to create UNICOV, a de facto nationalization of the health industry in accordance with his NeoLeft ideology. Election results forced him to accept the more moderate "National Health Plan" (NHP), which creates a comprehensive public health service in parallel to private health care. A further problem facing the Whigs is the sudden resignation from Parliament of Gore's heir presumptive Ion Edwards.

Following the Watergap Scandal and the death of John Robert O'Kinneide, Progressive Conservatives are regrouping under the leadership of Steven Harper, preparing for the 2010 Election. The issue they currently seem to be focusing upon is the issue of crime, in the wake of the swelling Signoret Crime War.

A listing of known Acts of Convention and also known acts of provincial parliaments.

One noteworthy practice within the NAL government and the governments of the provinces is the association of certain offices with honorary names in one of the Iroquois languages. By custom, the names are granted by the Council Fire of Aquanishuonigy.

It is a very old Iroquois custom to bestow honorary names upon people who hold positions of authority and influence. These names are linked not to the person himself, but to the position or office he holds; for example, the presiding chief of the Council Fire is always known as Tadodaho, while another Council member bears the famous name Hiawatha. This custom has its origin in Iroquois condolence ritual, in which new members of the Council Fire were ceremoniously given the names of the deceased members they replaced. The Iroquois carried this practice over to the Newcomer officials with whom they interacted and traded.

The first Newcomer office to thus receive a name was the governor of New France. In diplomatic discourse he was always Onontio, which means "Great Mountain". The name was a translation of Charles de Montmagny, a prominent 17th-century French governor. This formula, in which the name of a founder is simply translated, was common practice in the early days. Another example is Onas, meaning "quill feather", the name given to the governor of Pennsylvaania.

As the colonial era progressed and the Iroquois League found itself dealing with governors farther afield, the granting of a ceremonial name became a sign of friendship and respect and was usually accompanied by feasting and ritual smoking. The names thus granted often carried more meaning than simple translations of the name of the sitting governor. The Baron of Ter Mair, for example, was dubbed Tocaryhogon, "living in the middle place", referring to his province's position between Pensylvaania and Virginia.

The Solemn League and Covenant brought nearly all the colonies of the Allied Kingdoms together under one government, and from the perspective of the Iroquois (now the Province of Aquanishuonigy), linked together at one Council Fire. Aquanishuonigy therefore gave names to all the provinces that did not yet have one. The granting of an honorary name remains an important part the ceremonies associated with admitting new NAL provinces.

In the late 18th century the Crowns began appointing Superintendants, direct representatives to the Native peoples apart from the separate colonies. These were of course granted names, which were transferred to the Viceroys upon the creation of the Solemn League. The Kemrese viceroy, therefore, is named Warraghiyagey, "a man who undertakes great things," a name first given to the powerful Cambro-Irish superintendant Gwrthiern Ffeilioan.

Foreign officials are granted diplomatic names only rarely. Onontio's dates from colonial days, but a handful of nations with which the NAL maintains close alliance have been granted names as well. These are mostly Commonwealth countries located in the Americas, such as the Kings of Wallace Cay and the Mosquito Coast.

Today, most honorary names are well known in both the Native and Newcomer communities. Some enjoy more widespread use than others. The NAL press frequently uses Onontio to refer to both the Intendant of New Francy, who received the name when his position was merged with the governor's in the 19th century, and to New Francy in general. "Onontio to step down and face elections" and "Onontio sends troops to Hayti" are both acceptable headlines.

The name of a governor can be similarly used both for the person himself and for the provinces acting as a unit. In Parliament, for example, when debate breaks down (as it often does) along regional lines, you might hear an MP say, "I cannot understand why Brother Onas refuses to follow the reasonable course."

*All of these were used *here*. Iroquois is so incredibly "foreign" that I could not begin to make any up myself. Most of them, I think, are actually noun-verb constructions that I don't really understand. (BK, 35554)