Goracii refers to an alien race in the fictional Space Voyage 2245 universe. They were introduced in the second season episode "Last Son of Gorac" which also introduced the character of Professor Gideon, the only known survivor of the Goracii people following the invasion by the Zeniaks some years prior. 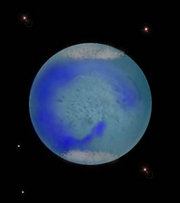 The Goracii are essentially humanoid in appearance, but have feathers instead of hair. On Gorac males generally wore theirs in a crest while females (whose feathers were universally white, as opposed to the male's multiple colors) usually shaved their scalps. All Goracii have prominent incisors, indicative of the fact that on their native world they were predators. Indeed, as a people they were renowned for berserker tempers which were kept under control with elaborate social protocols.

Gorac was not their original homeworld. Rather, it was a colony they fled to when some kind of catastrophe happened to their original planet. Since this happened thousands of years ago, and in the interim the Goracii had a dark age in which their origins became a matter of legend, the location of this fabled home is lost to antiquity. Its name, at least as far as legend goes, would translate into "Gorac Prime." Another aspect of the legend says the Goracii lived with a pantheon of gods. "Lords of Gorac!" is an expletive Professor Gideon sometimes uses.

When Gorac was attacked by the Zeniaks, the planet was emerging from three centuries of a repressive theocracy called the Synod which had forbidden contact with other species. It is known that prior to the Synod's rise Goracii starships had ventured far, looking for Gorac Prime and perhaps establishing colonies. Many such ships entered the Antilles Cluster but records are incomplete.

Physically, Goracii have two hearts and slightly hollow bones, which indicate an evolutionary relation to avians. There have been hints they are/were oviparous.