Freyenstein was a city in Schleswig that was lost in the terrible floods of the 1600's. Construction is now afoot to bring it back. The Rigsdal voted recently to restore this land and strengthen the coast against the ravages of the sea.

Several cities were founded and lost to the seas during the Medieval period. The longest standing was Freyenstein, a trading center that benefitted from early coastal trade.

Freyenstein was taken by the waves in the 1500's. While archaeological efforts have continued in the area, it was decided to protect the marshland from further encroachment, the basin having grown from three acres to some two-hundred in the last hundred years. 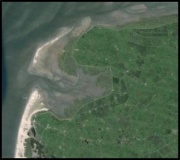 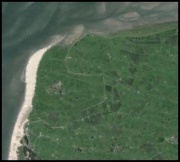 Plans were revealed in 2012 showing the proposed polder of Freyenstein just south of the North Frisian Islands. This new polder would serve to preserve the archaeology of ancient Freyenstein and to allow agricultural growth in Schleswig-Holstein. With the success of the Frisian Islands Project, other nations are jumping on the bandwagon.

Construction plans for the dike propose blocking the inlet first, then expanding it to enclose the new polder. As results of this construction are proven, it is expected that the coast will be further strengthened.