The sandstone bluff today called Starving Rock was first fortified by French explorers under La Salle in 1682. The site, called Fort St. Louis, was chosen for its defensibility and for its location just across the Illinoise River from Grand Kaskasia, one of the central settlements of the Illiniwek Confederation that dominated the region.

The Iroquois were expanding westwards during this time. Major raids in the 1690s led to the abandonment of Grand Kaskaskia. Most of the Kaskaskia and allied Iliniwek tribes moved to the south and west, into today's Illinoise province. French soldiers continued to occupy Fort St. Louis for a few years. Small numbers of Peoria, another Illiniwek tribe, moved into the area in the mid-XVIIJth century and may have inhabited the fort itself for a while. Historical records show that a Dumnonian monastic mission was located briefly in the area

The 1755 War divided the Native nations into pro-French and pro-Allied Kingdoms (British) camps. What remained of the Illiniwek Confederation sided with the French. During the war, the Utawia under Chief Bouantiac switched sides to support the British and advanced into Peoria territory. Some Peoria refortified the ruins of Fort St. Louis and took refuge there. In one of the most brutal episodes of the war, Bouantiac began a long seige in which the Peoria starved to death rather than surrender. The siege gave Fort Starving Rock its name and was a final blow to the Iliniwek, whose presence in Ouisconsin was already on the decline. The bulk of the surviving Iliniwek headed south into the river valleys of Illinoise, and most of their descendants later moved northeast into the Miami kingdom, with whom they shared a common language.

The Utawia did not move into the unoccupied territory, instead strengthening their position in the region that today bears their name, including the land around newly captured Fort Detroit. But their neighbors the Bodewadmi did move westward into the upper Illinoise River valley.

The Bodewadmi living within present-day Ouisconsin were cut off from their original homeland in Utawia. Known as the Prairie Bodewadmi, the people of the region began to adopt a centralized tribal government, largely in response to the consolidation and expansion of the Miami kingdom beginning c. 1800. In order to defend their eastern border against Miami, the Bodewadmi built a new fort on Starving Rock in 1804. Besides commanding the river, the fort was located nearly halfway between the mission and trading settlements at Chicago and Peoria, and so had new importance in the growing overland trade. 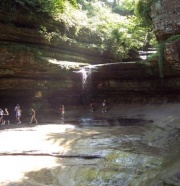 Ecotourists visiting one of the park's many waterfalls

The Ouisconsin Alliance was formed in 1828 in response to the French invasion of the region. Fort Starving Rock was the main muster site for the Bodewadmi soldiers. A French siege of the fort was short-lived, and from Starving Rock the Bodewadmi drove the French back down the Illinoise River and, together with allied Othaaki and Newcomers, recaptured Peoria.

After provincehood in 1836, Starving Rock's location was no longer important for defense. But it remained the headquarters of the Bodewadmi Militia. In the 1840s, the Bodewadmi government began to discuss building a canal to connect Chicago with the Illinoise valley. For much of its length, the canal would parallel the river. The government recognized the population growth that would result from the canal, and plans were made for several new port towns. Many on the Bodwadmi Council recognized the unique natural beauty of the site, with its many sandstone canyons headed by waterfalls. To discourage the growth of a town around Starving Rock, the decision was made to move the militia headquarters downstream to Fort Zhagenash, though a small militia presence remained on the rock.

The provincial government took over the land in 1874 when the fithings' separate militias were combined in response to growing tensions within the North American League (the Crisis of 1875). In 1880 the entire area was declared a provincial park. Active-duty militia were removed from the fort. It remained the site of military exercises and ceremonies, however, due to its importance in two major wars. In 1928, a unit of the Gubernatorial Guard, the governor's honor guard, was stationed there as part of the centenniel of the 1828 war. They continue to occupy the fort today, together with the rangers who run the park.

Wildlife in the park

Today, Fort Starving Rock is one of Ouisconsin's most popular natural attractions. Its contingent of Gubernatorial Guardsmen, renowned for their crisp pageantry combining Native and European elements, provide a cultural attraction as well. It is one of three places where the Guard is stationed, the other two being the Palace in St. Francis and Alliance Rock near Prairie-du-Chien. In popular historical memory, the Rock is one of the places where the Ouisconsian identity was forged. Regular exercises commemorate the tragedy of the Utawia siege (the fact that none of the tribes of modern Ousconsin were involved is seldom mentioned) and the bravery of Ouisconsian soldiers in the 1828 War.