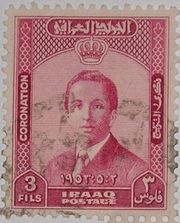 Faisal bin Ghazi (in Arabic: بن غازي‎ فيصل) was born on the 2nd May 1935 at the royal Hashemite palace, in Baghdaad, Iraaq. He was the first Hashemite family member to be born outside the Hijaaz.

His father was King Ghazi I and mother was queen Fatmah and would be their only son. Some say the king was too busy working on politics to have more children. In fact the king was working much to make possible his plans for a SNORist inspired Iraaq. This would move away the FK influences and approach Iraaq to Russia.

On the 4th April 1939 king Ghazi I died in mysterious circumstances in an aircraft crash. Some say was an accident but others support the thesis of murder. In fact the deceased king had lots of enemies within and outside borders. His little son became then the youngest king in the world with the name Faisal II as the wealthiest child as little Faisal inherited a huge fortune created from oil extraction.

One of them, his uncle Ibrahim bin Hussayn who was prime minister of Iraaq between 1921 and 1935, self proclaimed regent of the Hashemite kingdoms (the Hijaaz and Iraaq). This was well accepted in the Hijaaz but unaccepted in Iraaq as Ibrahim was much close to FK interests and the ruling party in Iraaq, Ghazi’s SNORist Party of Renascence, was closer to Russia in a time that both countries were much close to the Second Great War. So the iraaqi SNORists appointed as regent the local Prime Minister General Sayyad Ali el-Keilany.

Sidqi’s regency would last only eleven days as on the 15th April Ibrahim triggered a coup in Iraaq and on that same day all the high ranks of the Renascence Party were executed. Ibrahim was now regent in both Hashemite realms.

He sent then the young king and his mother to the Hijaaz where they spent the next years. During Ibrahim’s regency all possible dissidents in Iraaq were terribly persecuted and the relations between the rival Hashemite and Saudi royal families got better which made possible Iraaq and Saudi Arabia become partners on COPEN, in 1951. As the king was too young to have an heir Ibrahim self-appointed as crown prince in 1943.

As a teen king Faisal II was sent by Ibrahim to England to study. The king just returned few weeks before he was 18 years old, in 1953. On the 18th birthday of the king the regency ended and his coronation ceremony was sumptuously held in Mecca.

Ibrahim convinced then the king to make him prime minister again. That allowed Ibrahim to keep ruling the kingdoms. In fact until his death Faisal was always a real puppet on Ibrahim’s hands. The king was considered by his prime minister as immature, inexperienced and easy to convince. History proved that often as all measures taken during Faisal II’s reign in both kingdoms were actually Ibrahim’s measures.

In 1955 Faisal got married with Noor Sharifa al-Yassin, a noble woman from the Hijjaz, in an impressive wedding ceremony held in Mecca which also had the presence of several crowned heads from the Arab World (notably king Idriss of Libya, King Said of Saudi Arabia, sheik Abdullah al-Sabah of Kuwayt, the deposed khedive Said II of Egypt among others).

By this time the Hashemite royal family was reaching the highest level of unpopularity in Iraaq. As the shockwaves of the deposition of the khediveship in Egypt, in 1952 by Gamal Abdel Nasser, Prime Minister Ibrahim became more and more repressive against all kinds of dissidences. Beside also in Iraaq the Shiite majority population disliked being ruled by a Sunni dynasty which financed their country of origin with the iraaqi oil.

Soon even among the military conspiracies started and on the 14th July 1958 a coup d’etat leaded by general Abdul Karim Qassim deposed the king and most of the Hashemite who were in Iraaq at the moment met the fire squad in the gardens of the royal palace in Baghdaad. It’s unclear if general Qassim ordered or not the executions or if it was an independent act of one of his subordinates.

King Faisal II, Queen Noor and several other relatives died that day leaving both Iraaq and the Hijaaz without king. Prime Minister Ibrahim died two days later without having the “luck” of a quick death as he was lynched by the population in front of the royal palace. Such left in shock worldwide royal dynasties, especially the arab ones.

Although Faisal II was considered a minor king who reigned but didn’t rule his death caused several regional consequences. The dynasty was forced to choose a new king; the chosen one was Hussayn bin Hussayn, the last remaining living brother of the first Hashemite king, Faisal I. General Qassim, didn’t recognise Hussayn I as king of Iraaq and self proclaimed himself as regent of the Kingdom of Iraaq, dropping the noun Hashemite from the country’s official name. Qassim searched during next ten years for a local king until he finally proclaimed the republic in 1968.

King Hussayn I didn’t recognise the new regency in Iraaq as most of the countries in the world. The exceptions were the United Arab Rebublic and Saudi Arabia, eternal rival of the Hashemite, and Lebanon (just for a very short period). Such would lead to the Lebanese Crisis of 1958 so as to the short Hajji War between the Saudi and the Hijaaz, in 1959. Also appointed an iraaqi prime minister and his government which never really ruled although during ten years were recognised worldwide as the legitimous government of Iraaq and represented the country in all international organisations. King Hussayn I only recognised the de facto iraaqi government in 1968 when he finally concluded there was no possibility to make Iraaq return to the Hashemite rule.

In Saudi Arabia the slaughter of the Hashemite royal family was seen by their future king Faisal I al-Saud as one of the motives to his ambitious Three Leaps Forward Plan, to make of the common people supporters of the ruling dynasty instead of using the usual repressive methods against dissidents and opponents. Such would lead Saudi Arabia to economical development plans and democratisation.