Early life and the Arab Rebellion 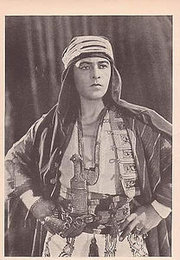 Faisal bin Hussayn (in arabic: فيصل بن حسين) was born on the 20th May 1883 in Taif, Hijaaz. He was the oldest son of Hussayn bin Ali, the Grand Sharif of Mecca, and his eventual successor.

In 1913 he was delegated to represent the province of Hijaaz at the ottoman national council. In 1916 Faisal joined a nationalist arab movement which soon started a rebellion instigated by the Federated Kingdoms and France to fight Turk Ottoman dominance. As result, his father Hussein bin Ali was overthrown by the Turks and executed being replaced by a new Grand Sharif closer to turk interests but not recognized by the people of Mecca.

Faisal worked with the Allies to fight ottoman forces in Arabia and Levant. Together with a kemrese explorer, adventurer and mercenary, who later would be known as Llawrent di Arabia, he expelled the Turks from what is today the Bedouin Free State, Damascus (in Syria) and later Hijaaz which declared its independence with Faisal as king (1918). By this time Faisal was recognized as the greatest living arab leader.

With the end of the First Great War the now king Faisal I defended at the following peace conferences the independence of the several arab regions still controlled by the Ottoman Turks. Faisal I gave supports to the several following arab rebellions against turk occupation in a pan-arabist context. But his pan-arabist interpretation was different of others. Faisal I defended a monarchic Pan-Arabism where the several arab countries should unite towards the restore of the Caliphate. As the Hashemite (of which Faisal I was now the leader) could trace their origin to Hashim ibn Abd al-Manaf, the great grandfather of Prophet Muhammad, Faisal I should be the future new caliph of his proposed Hashemite Caliphate. On July 1920 his relative Pasha al-Atrash leaded a rebellion in Syria and became sultan of the Sultanate of Syria. Al-Atrash recognized Faisal I’s pretensions but kept Syria independent until further decision and gave Hijaaz support against an attempt of conquest by Saudi wahabbis.

With the collapse of the Ottoman Empire, in 1920, the Federated Kingdoms jointly administrated the newly created State of Iraaq as a League mandate. But things got much difficult there as Iraaqis, armed with weapons left behind by Ottoman Turks when they withdraw, rebelled against the mandate administrators. Iraaqis were taking too many lives from FK soldiers and the occupiers replied them with massive brutality. Soon discontentment grew in FK. Parliamentary opposition at the Federated Kingdoms and public opinion couldn’t accept such high price in human lives just for defending that “useless large portion of sand” (as press editorials called then Iraaq) and the brutal way militaries replied.

Was needed a way to find out an honorable retreat without giving the impression of a military disaster. After one year of occupation solution was found: leaving Iraaq to a loyal local leader. But no such leaders existed there as natives just couldn’t stand any relation with FK. Government was forced then to offer Iraaq to the most loyal ally in the Middle East, King Faisal I of Hijaaz. This way they could finally retreat and wash their hands for any way which could be used to end the rebellion.

Faisal I was crowned king of Iraaq in August 1921 and ruled over the two kingdoms in separate on a personal union. Although Faisal was still a foreigner at least he was an arab, a muslim and a recognized great leader among all Arabs. The king moved his residence to Baghdaad where he could supervise closer and personally the instauration of the new rule.

Rebelled Iraaqis were repressed but when oil was found in Iraaq, in 1927, Faisal I bought the loyalty of the tribal leaders by offering concessions to them who got much wealthy and big supporters of the king. Finally Iraaq was pacified. With oil Faisal I became one of the wealthiest men in the world and together with many tribal leaders all of them became the ruling elite until the fall of last Hashemite king of Iraaq, his grandson Faisal II, in 1958.

Faisal I wanted to unify in a single country all of those which were under Hashemite dynasty (Hijaaz, Iraaq and Syria) proclaiming the restoration of the Hashemite Caliphate but never did so. European governments made lots of pressures to avoid that as they preferred a Middle East divided in several small countries and not a new large country which could become too powerful and might face them on future.

In 1932 a Christian orthodox-led coup deposed Sultan Abdullah bin Hussayn, brother of Faisal, ending the Hashemite rule over Syria and proclaiming the republic. Elsewhere in the Arab world pan-arabism was growing but in a much different way of what was defended by Faisal I. While his vision of pan-arabism was mostly a wish of the elites the new currents of pan-arabism moved towards a popular movement and sometimes quite democratic and secular. His dream of restoring the Caliphate was more and more distant to achieve and finally ended when he died on the 8th September 1933 in Baghdaad, victim of poison. Both is rumored that there was a foreign hand to kill him or that his death was caused by the crown prince, Ghazi, who succeeded Faisal as Ghazi I and made evolve the ideal of the Hashemite Caliphate moving towards a snorist-like goal.