The Faeroe Islands (Faeroese: Føroyar, meaning "Sheep Islands") are a group of islands in the north Atlantic Ocean between Scotland and Iceland. They are an autonomous region of the Scandinavian Realm. Since 1948, they have had self-government in almost all matters except defense and foreign affairs.

The Faeroes give their name to one of the British Sea Areas.

The early history of the Faeroe Islands is not clear. It appears that, in about the beginning of the 9th century Grímr Kamban, a Norwegian emigrant who had left his country to escape the tyranny of Harald I of Norway, settled in the islands. Early in the 11th century, Sigmund or Sigmundr Brestisson, whose family had flourished in the southern islands but had been almost exterminated by invaders from the northern, was sent from Norway, whence he had escaped, to take possession of the islands for Olaf Tryggvason, king of Norway. He introduced Christianity and, though he was subsequently murdered, Norwegian supremacy was upheld and continued until 1386, when the islands became part of the Kalmar Union and later the double monarchy Denmark–Norway. The Faeroe Islands then became part of the Scandinavian Realm by the Scandinavian Peace Treaty in 1810.

On April 12, 1940, the Faeroes were invaded and occupied by British troops. In 1942–43, the British Royal Engineers built the only Aerodrome in the Faeroes, the Vagar Aerodrome.

Tinganes in Tórshavn, seat of the government

A high degree of self-government was attained in 1948 and the Faeroese are supported by a substantial annual subsidy from the Scandinavian Realm. The islanders are about evenly split between those favoring complete independence and those who prefer continued presence in the SR. Within both camps there is, however, a wide range of opinion. Of those who favor independence some are in favor of an immediate unilateral declaration. Others see it as something to be attained gradually and in full consent with the Riksråd (the multi-national SR government). In the unionist camp there are also many who foresee and welcome a gradual increase in autonomy even as strong ties to the SR are maintained.

The islands are administratively parted in seven counties, which in turn are divided into 120 communities. 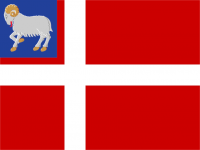 The Faeroe Islands are an island group consisting of 18 islands, off the coast of Northern Europe, between the Norwegian Sea and the north Atlantic Ocean, about one-half of the way from Iceland to Norway. Its coordinates are 62° 00' N 06° 47' W, and has 1,399 km² in area, and includes no major lakes or rivers. There are 1,117 km of coastline, and no land boundaries with any other country. The only island that is uninhabited is Lítla Dímun.

The Faeroe Islands generally have cool summers and mild winters, with a usually overcast sky and frequent fog and heavy winds. The fog often causes delays of airplanes. The islands are rugged and rocky with some low peaks; the coasts are mostly bordered by cliffs. The highest point is Slættaratindur, 882 meters above sea level.

After the severe economic troubles of the early 1990s, brought on by a drop in the vital fish catch, the Faeroe Islands have come back in the last few years, with unemployment down to 5% in mid-1998. Nevertheless, the almost total dependence on fishing means the economy remains extremely vulnerable. The Faeroese hope to broaden their economic base by building new fish-processing plants. Oil finds close to the Faeroese area give hope for deposits in the immediate area, which may lay the basis to sustained economic prosperity.

The low unemployment of the Faeroes isn't a sign of a recovering economy as many young students travel to Denmark and other countries once finished with High School, leaving the middle aged and elderly population that lacks the knowledge to fill in IT positions on the Faeroes. 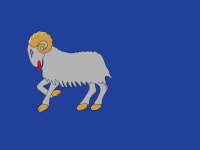 The phrase "Faeroe Islands" is tautological, since øerne or oyar means islands in Riksmål and Faeroese, respectively. The Faeroes have a culture very much their own but the closest cultural relatives are Norway, Iceland and Denmark.

They speak a Scandinavian dialect that is limited to a few thousand people. Linguistically, they are most similar to Icelanders.

Retrieved from "http://ib.frath.net/w/Faeroe_Islands"
Categories: Source | Member states of the SR