The province Emsland is a district within the Kingdom of Hannover named after the river Ems. It is bounded by (from the north and clockwise) the province of Aremberg, the Duchy of Westphalia and Batavia (provinces of Drenthe and Groningen).

For a long time the Landkreis Emsland was extremely sparsely populated, due to the fens on both sides of the river. Small villages were established in medieval times along the river and on the Hümmling. The inhabitants of Emsland are thought to be descendants of English, Frisian and Dutch settlers who arrived in the area in the 13th century. Shortly after, the bishops of Münster gained control over the region; the Emsland remained property of the bishop until 1803, when the clerical states were dissolved. It came under rule of Prussia and Arenberg, but after the Napoleonic Wars the Congress of Vienna decided to hand the territory over to the Kingdom of Hanover. The Duchy of Arenberg continued to exist as a fief of the Hanoverian kings. When Hanover was annexed by Prussia (1866), the dukes were deposed soon after. 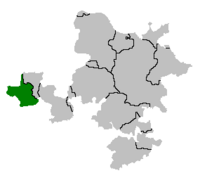 Emsland with the Kingdom of Hannover
Retrieved from "http://ib.frath.net/w/Emsland"
Category: Hannover