Ireland was for many centuries a colonial domain of the Kingdom of Kemr. After decades of agitation, in 1922 the Irish won their independence from Kemr and formed the Irish Freestate. Gaelic is the everyday language, though Brithenig is still taught in schools and is important still for economic purposes. After federalisation of 1956, the country came to be called the Irish Union.

The AÉ has a (nominally) unicameral legislature, consisting solely of the Dáil. It sits in Caislean Chill Chainnigh and is considered a continuation of the Oireachtas Comhaontascach (Confederate General Assembly).

In addition, Coiste Cónascach (Federal Committee) sits as the de-facto upper house. Each Uasal from each of the tuatha has a seat on it. The Uachtarán chairs the council, but normally doesn't directly participate in the debates, though if needed can cast a deciding vote. This council does not run the country, but acts as an advisory body to the sitting government. This body is also charged with protecting the constitution and can reject bills and statutory instruments on those grounds with approval of the Uachtarán.

The country is divided into the traditional Cúigí (lit. fifths, sg. Cúige) or provinces. These are further divided into federal territories or Tuatha (sg. Tuath).

In addition, there is one autonomous district around and including the city of Corcaigh, called Ceantar an Phobail Féinrialach Eíceatópaic Corcaí, having the same rights as a territory, but lacking the ability to have its leader sit on the Federal Council of State. Montserrat, which recently successfully petitioned to join the AÉ after a referendum is currently an autonomous district, but will become a territory as soon as its constitutional status is fully resolved. 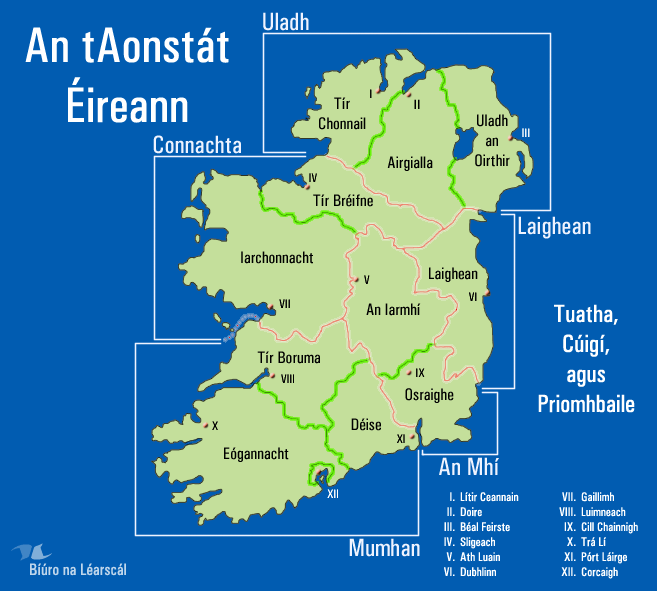 The exchange rate between the FK Pound and the AÉ Líre is £1/- (FK) = £1/1 (AÉ), with a metal content of 1750 grain pure silver, though the currency was initially valued £1/1 (FK) = £1/- (AÉ) to inspire confidence in the value of the new currency, though later devalued to its current rate by the currency commission once it was established. The currency is used as legal tender in Ireland itself (including the newly incorporated territory of Montserrat), Western Peninsular Florida (for the duration of the occupation), and alongside the Commonweath Pound in Tír Ghearoinn.

The primary denominations are:

All gold coins are commemorative.

Currency is controlled by Federal Currency Commission. This body controls which banks are allowed to issue notes, though in reality the only banks that do are The People's Trust in Corcaigh, the Provincial Bank of Ireland and the Bank of Laighean. The obverse of the coins is allowed to vary according to the minting authority, but this doesn't happen in practice.

Gaelic (Gaeilg) is understood by all the population, but is not the only language spoken.

In Osraighe and An Déise, there are populations that speak an highly archaic dialect of English known as Yola. Under threat up until the 1970s, a movement to preserve the language began to gather momentum in the 1960s. Osraighe also has a small but strong Kerno-speaking community.

In Laighean, which has a large number of people of Kemrese descent, Brithenig is widely spoken. Indeed, the Kemrese population there is so great that it was one of the factors that lead to the rise of federalism during the latter part of the Civil War. The territory also has numbers of Kerno and Manoeg speakers.

Ireland is primarily Cambrian Rite Catholic (locally referred to as theCeltic Rite, though), with immigrant communities like Italians and Veneds bringing the standard Latin rite with them to Ireland's shores. The largest Protestant denomination is the Presbyterian Church, followed by the Evangelic Church although most of its adherents are descended from the Kemerese occupiers of centuries past or recent immigrants from other countries. There is also a substantial and vibrant Jewish population in urban areas, particularly in Corcaigh, Luimneach, Dubhlinn, and Béal Feirsde. Cravethism gained a degree of popularity amongst the youth demographic, but neopaganism was highly frowned on by society as a whole and conversion rates peaked sometime in the 1990's. Other religions such as Zoroastrianism, Hinduism and Buddhism have came to Ireland via immigrants, although no doubt native converts exist.

Ireland is unique in Western Europe in that it has indigenous Muslim and Orthodox Christian communities who have long nativized. Ireland's Sunni Muslim community is highly insular and descended from Andalusian merchants who did business with the Norse and sent countless amounts of native Irish to a life of slavery in the Caliphate of Cordoba or North Africa. The city of Loch Garman was founded by Viking raiders as a trade depot and initially named "Veisafjǫrðr" where Hispano-Arab merchants primarily set up shop (along with towns in Kemr like Glamorgan and Dyfed), and is uncoincidentally where the Hiberno-Moorish presence is strongest today. Although they have long forgotten Arabic, Berber, or Mozarabic and speak only Gaeilg, they still practice endogamy, only allowing converts to marry into their tightly-knit community. As apostasy from Christianity was illegal until the 20th Century, there were hardly any native converts to their faith at all. The Celto-Moors follow the Ẓāhirī school of jurisprudence made popular by the Muslims of Spain, which explains why it's still the main school of jurisprudence for Muslims in Mueva Sefarad and Sunnis still left in the highly Khwaraj Maghreb (and also a minority of Sunnis in the post-Muslim Alavi Mughal National Realm for some reason).

Meanwhile, the Orthodox Church only got its start in Ireland in the late 19th Century. Although Ireland is still one of the most devout countries in Western Europe, the Catholic Church was very much tied to the Kemrese occupying force which ruled Ireland for 700 years. In the mid-19th Century, the ecclesiastical world was a political battlefield. After the advent of secular nationalism thanks to the French Revolution, Irish intellectuals started calling into question the purpose of the Catholic Church when it was so intertwined with the Kemrese state and in favor of the complete linguistic shift of the islanders from Gaeilg to Brithenig. The Catholic Church gave legitimacy to the Kemrese and their so-called "civilizing mission." Castreleon wanted to bring a sense of Romanitas to the people of Ireland, while the Irish nationalists wanted to maintain the Irish identity as purely Celtic. It was however not secular nationalists who caused Ireland's first religious schism since the Protestant Reformation, but the rural peasantry who were pushed to poverty and the brink of starvation by their occupiers. They made their dissatisfaction with the Kemrese colonialist venture by resisting liturgical form that the patriarchate of Glastonbury enacted in 1865. The liturgical changes were sudden and rushed and came down to parishes by force from the nonnative bishops. The state was called in to maintain order in villages where priests celebrated the new liturgy. The presence of the gendarme had the opposite effect, and soon enough, the peasants' skirmishes turn into a fully-fledged revolt, which caught on across the very rural Armagh. The revolters started calling themselves "the Old Believers," or "Na Seanchreidmhigh" (singular: " An Seanchreidmheach." "Sean-chreideamh" is "the old faith/belief/creed") The nationalist awakening of its people culminated in the Old Believer Schism. In 1893, after decades of searching for a spiritual home so as to have bishops again (no bishops went with the people into schism in 1865), the Old Believers asked to be received by the Orthodox community in London which had been around by that point for slightly over 200 years. However, in 1905, through mutual agreement between the patriarchates, the Orthodox Christians of the Federated Kingdoms were transferred from the jurisdiction of the Patriarchate of Jerusalem to that of Constantinople. Although their autonomy is only de-facto, not de-jure, their bishop and almost all of their priests, deacons, and laity are Duine na hArd Mhacha ("people of Armagh") who only receive a small amount of funding from Constantinople and they've never had any real interference from the ecumenical synod, of which their bishop is a member. Byzantinization has been minimal and slow coming. The Ecuemenical Patriarchate has never sent Greek missionaries in Ireland, leaving evangelism as in-house endeavor for the Armachians to accomplish. Their liturgy is celebrated in modern Gaeilg, neither in Latin as it had previously been during the Kemrese occupation nor ecclesiastical Greek. There are about 568,074 Orthodox Christians in Ireland. It might be the second largest religion in Ireland after Catholicism.

The national colour is green, and this is used by various sporting federations as their strip colour. In part, this symbolises the Irish landscape, and in part the national plant, the White Clover.

The White Clover (Gaeilg: Seamróg) is the national plant and an unofficial emblem of Ireland. Nowadays the Yellow or Lesser Clover is commonly used in its place. According to legend it was used to explain the doctrine of the Trinity by Saint Patrick; it's likely however that its symbolism dates back even further as triads were a common motif in pre-Christian religion and art on the island. It is worn on Saint Patrick's Day, and can be found incorporated into the symbols of various national and state bodies.

The Coat of Arms of Ireland

The official state emblem is the Harp of Brian Boru. Brian Boru is seen historically as the last true High King of Ireland. The Harp, which currently resides in Ardscoil na Tríonóide, actually dates back to the 1400s, 400 years after the death of Brian Boru and was simply named in his honour.

The harp is currently used as part of the Coat of Arms of Ireland and is used on all state documents, seals, and legal tender. It forms the primary element of the Presidential Standard and the the Great Seal of the Union.

[Need to expand these.]