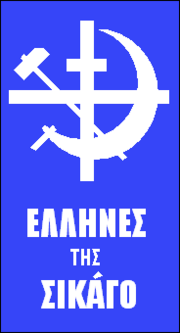 The homemade banner that sparked the rioting

The Efeseyist scare of '21 is a particularly dark blot on the history of a city that has many. The Great War was over. The factories of Chicago had been busy cranking out guns and uniforms. The Ouisconsin provincial government and all five fithing Chiefs had lodged their official opposition to the war, but Chicago never let politics get in the way of a few pounds. But now the government contracts were expired. The work orders used up. The city was full of soldiers and farmers looking for jobs, but there were few to be had.

It's a familiar story: when times get hard, look for a scapegoat. And Chicago found its goat in the large and growing Greek community, full of successful small businessmen, restauranteurs, tavern owners, shopkeepers. As the number of stores fronted with strange alphabets seemed to multiply while others found themselves out of work, people began to forget their decades of hating the Germans and came together in hating the Greeks.

As often happens, events abroad fueled paranoia at home. Zeoduero Efeseyo was beginning to wage his revolution for a free Nea Illenicia down in Riu de l'Argent. What most people heard about his ideology didn't sound pleasant. He admired Marx and Trotsky-- a Communist. But he also glorified the Orthodox Church-- a Snorist. Weren't those the two groups of no-goods fighting it out in Russia? Add to this the rumored influence from the Ecotopians, and Efeseyism seemed like a combination of every single dangerous ideology there was.

So it seemed that the Greeks of South America were coming under the influence of dangerous revolutionaries - the fact that the Costanice were a nation distinct from Greeks proper did not change this perception. Chicago did have a small Costanice community. They mostly associated with the Greeks because of religion, but their languages were not mutually intelligible. But Efeseyism did in fact have a certain currency among some in Chicago's Greek/Costanice political community. The general mistrust toward Greeks began to grow into a genuine paranoia.

The riots were ignited in July of 1921. Several of the Orthodox churches were having a procession in honor of St. Sophia's Day, which had become a major ethnic festival for the city's Greeks and Costanice. As usual, the event attracted its share of people shouting derisive remarks, and the police were called out to guard the marchers. However, during the procession, a small group of young men unfurled a banner with the hammer, sickle, and cross of efeseyism. The policemen were as shocked as anyone, and did not try very hard to stop the toughs who began following the procession to set the bolsheviks straight. When the parade broke up, several stragglers, none of which were the bearers of the offensive banner, were beaten.

The next day, some Greek community leaders gathered to protest the police's negligence in protecting their countrymen. Riots and fights broke out and continued for a week. The riots left 38 dead, approximately 500 injured, and hundreds with great financial losses when their homes or shops were burned. Martial law was declared. The Continental Marines landed at Lake Mishigami, one of the earliest modern amphibious assaults.

The arrival of the military ended the riots quickly. They had been so widespread that few of the instigators were ever brought to justice. The event tainted ethnic relations throughout the NAL-SLC for years to come.

The City made an official apology in 1980. A memorial now stands at the spot where the riots first broke out. It remains a rallying point for political gatherings to this day.