The dodo is a flightless passerine native to the islands of The Kingdom of Mauritius. First discovered by Dutch sailors, it was mostly left alone by human settlers due to the fact that its meat was not particularly appetizing in comparison to that of the seabirds that they hunted and the chickens that were later brought to the island. However, much like *here*, the species faced endagerment for quite a while due to the adults often being hunted by dogs, the young being preyed upon by cats, and the eggs being eaten by rats. Miraculously, however, a few individuals survived until around the 1900s, when more efforts were made to conserve native species. While dodos are still endangered to this day, captive breeding programs have helped the species survive and it is still a symbol of Mauritius, as well as a symbol for endangered species.

The species has also seen some prominence as a popular zoo animal and less commonly exotic pet, being favored for their overall gentle demeanor towards human handlers and unique appearance. It is estimated that there are more dodos in captivity in each the NAL and Louisianne than in the wild in Mauritius. 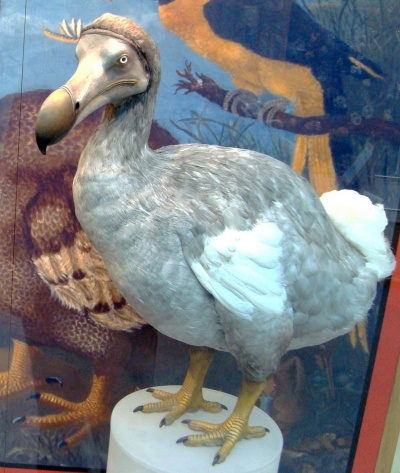 An image of a stuffed dodo bird in a museum.
Retrieved from "http://ib.frath.net/w/Dodo"