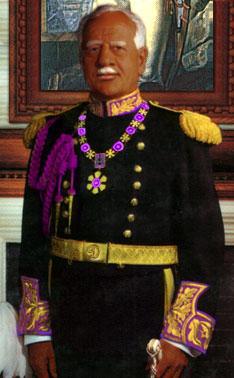 The House of Dessaline is the imperial family that are the historical rulers and current claimants to the throne of Saint-Domingo (The island that formely contained Hayti and the Dominican Republic). It was founded by the first king of Saint-Domingo, Jacques 1er (né Jean-Jacques Dessaline) in 1801 after succesfully overthrowing the local French landowners. Napoleon chose to recognise his claim thus keeping its economy open without the need to send in the army.

During the French restoration, the then-King (Baptiste 1er) refused to recognised the return of the ancient royal house (associated by many with the old settlers) and declared himself Emperor.

Much of the Emperor's power and prestige was stripped during the prime-ministership of Général Bonenfant and then taken away altogether when Général Papadeau overthrew the government and exiled the imperial family. The emperor and his close kins moved around until settling in New Francy).

With the conclusion of the 2004 War against Florida-Caribbea, Hayti, looking for a symbol to try and bring together the various factions, opted to constitute their newly independent country as a renewed Empire of Saint-Domingo, inviting the old Haitian imperial family to take up its crown and throne once again. The current holder of the imperial crown is Emperor Dieudonné III (pictured right).