Charles I of England and Scotland 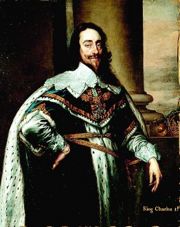 Charles I, King of England and Scotland

Charles I (born 1600, died 1662) was the second son of James II/VI and Anne of Denmark. He was an underdeveloped child who was unable to walk or talk at the age of three. Charles was not as well-regarded as his elder brother, Henry, Duke of Rothery and Kent. Charles himself adored Henry and tried to emulate him. In 1605, as was then customary in the case of the Sovereign's second son, he was created Duke of York in England. Two years before, in 1603, he was created Duke of Albany in Scotland. When his elder brother died of typhoid in 1612, Charles became heir apparent and was subsequently created Duke of Rothery and Kent in November 1616.

The same year he succeeded to his father's throne, Charles married Henrietta Maria of France, nine years his junior, by proxy. Eventually she bore him two sons who survived infancy.

Charles was a believer in absolute monarchy. His attempts to wield absolute power lead to a civil war in England, which resulted in the Parliament convicting the king of high treason and ordering his execution in 1649. He managed to flee to Scotland where, with Kemrese protection, he remained safe from England. After his deposal, the English Parliament proclaimed England a Commonwealth. England durign this period was governed by Thomas Rainsborough.

Finally, however, in 1657, after the English Parliament proclaimed Thomas Rainsborough "King Thomas I", King Donal II of Kemr at last consented to aid Charles in his effort to retake England. The so-called War of the Three Kingdoms began in late 1657, and lasted until 1661, when at last London was captured by joint Scottish-Kemrese forces. The usurper Thomas I was executed, and Charles returned to the throne of England. He died the next year, and was succeeded by his son, Charles II