Captain Silver is a superhero (one of the 'Big Five') in the Millennium Comic universe.

Oswald Lambert was the 10-year-old son of famous archaeologist Henry William Lambert and Amelia Petrie. One day, when his mother had left him in the care of an inattentive Scots nurse, Lambert wandered off and found an entry into the Pyramid of Cheops. He fell down a long tunnel into a chamber with an eerie glow. He picked up a silver ring he found on the floor of the chamber. Suddenly a wizened old bearded man-dwarf appeared out of the ring. This old man told Lambert that he was Lebu, a member of an order of ancient wizards who had ruled first Sumer before the city-states arose and then Egypt after Horus and before the Pharaohs as tyrants. But he (Lebu) had rebelled. The wizards had stripped him of most of his power, but he had found a ‘silver magic’ that could counter the ‘red magic’ of the wizards. Then he bestowed the ring and the (full-frontal) mask of Lebu on Lambert. He explained that the ring had some native silver magic but gained more power from absorbing attacks of red magic and died except for his memory, which re-entered the ring and served as a seemingly inexhaustible resource for Lambert.

Lambert used the ring to fly up the tunnel and out. When Lambert was fighting the evil wizards as Captain Silver, he used the Mask of Lebu to disguise his identity and to create the impression he was a renegade wizard rather than a prepubescent boy.

A weakness of Captain Silver is red (living) flame.

Captain Silver's primary foes are the Red Wizards, who had been exiled from our dimension by the combined silver energy of the wizards of the ancient world. Each Red Wizard was exiled to a different dimension (all rather barren) which was sealed against their escape. Recently, one of them discovered a way out of his dimension and began to free the others so that they could take over the world. Lambert, as an imaginative ten-year-old, suffers far less from disorientation than a Millennium City adult would in other dimensions.

The Hounds of Hell are giant beasts from the mystical dimension of Annwn. Captain Silver struggles agianst them because their red and white coats indicate that their power is a mixture of silver and red magic.

Burno the Burning Man is a villain who can wield fire by the power of the mind.

The Petty Prince is a power-mad tyrant from another dimension where magnetism replaces gravity. He uses a 'mystic net' much like a butterfly collectors' net to kidnap individual children to be his best friend. Occasionally the Petty Prince works on commission for King Solo of Solaria. The Petty Prince is known to talk to animals and flowers. 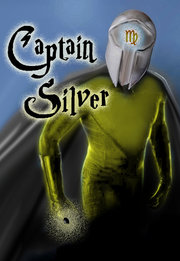 Captain Silver is Millennium City's mystic hero. As such, his stories often involve mystical dimensions and magical menaces. If there is a renegade magic user, he is the one on-call.

He is also the hero who is likely to encounter anthropomorphic personifications. He has encountered Death, as well as the trinity of Time, Aevum, and Aeternum, who represent the temporal/spiritual layers of the universe.

As a member of the Legion of Light, Captain Silver serves as an advisor on magical threats and an access to mystical dimensions.

Captain Silver recieved a temporary boost in the early 1980's, thanks to the advances and discoveries in Egyptology, even leading a small mission time for a time. Millennium Comics, however, overestimated the popularity and used too many gimmicks and silly villains; these included the villainous interdimensional rodentoid Chimpunks, Weresheep, and furry midget mermen who were derided as aquatic hobbits. that Captain Silver retained for a decade a reputation for all flash and no real light.

When Millennium Comics decided to renovate Captain Silver in the 1990's, it decided that it needed to simplify the seemingly endless number of dimensions from various Red Wizards had escaped and to which Captain Silver had travelled.

In the renovation, the suddenly adolescent Captain Silver discovered that the break-outs of various Red Wizards from their dimensional prisons had weakened the barriers between these dimensions, just as removing supports from a building will eventually cause it to collapse. Therefore various dimensions were collapsing into one another and producing new dimensions with new magical/metaphysical rules. Unfortunately, the flaws which the new dimension possessed from the beginning of its existence led to interrdimensional rifts that caused the process to repeat. Captain Silver gathered the still-extant magic-users living in the main Earth's mystical dimension (including Mum-Hotep and The Hummingbird) and contained the destruction of the infinite dimensions. One of the mystical dimensions lost was that of the Living Moon, home dimension of The Hummingbird, which volunteered itself and its current inhabitants as the requisite blood sacrifice. The Hummingbird herself survived, but lost her powers and was restored to normal human size. She became Captain Silver's girlfriend in lieu of Berry, who had died in the destruction and had been reincarnated as an infant. The Hummingbird now began to study the new rules of magic.

A consequence of the stay of interdimensional collapse was the conglomeration of several denizens of formerly separate dimensions into one. This (unfortunately for Captain Silver) included Red Wizards who had previously been isolated from each other. Several other heroes and villains had absorbed a large portion of the power of the destroyed dimensions. The Hummingbird was among these, although she now had to study to control her power.

The renovated teenage Captain Silver has been known to have long conversations with the teenage fertility spirit The Green Girl, ward of Doc Gabriel. He also gets along well with Joculatrix, 'sidekick' of Mentor, whose apparent mental instability makes her an ideal candidate for extra-dimensional travel.

Millennium Comics has used Captain Silver and his supporting cast in pamphlets meant to explain about various religions, starting with Apollinarianism and starring his girlfriend Berry Ommerru. Captain Silver has no particular religious affiliation, but the pamphlets lean toward a Catholic perspective.