The Bush Regime is a term used for the functioning government of Tejas between 1988 and 2000, starting with a military coup and ending with the fleeing of Jorge Bush in the wake of military defeats at the hands of Alta California and Mejico. It has become notorious for its initial seeming-success, followed by disintegration amid repression and extravagance.

Tejas in 1988 was approaching the end of its second decade of rule by a variety of quasi-military governments since the end of the monarchy in 1970. A highly disputed general election had handed Reform candidate Luiz Bentsen (1921-88), the son of Scandinavian immigrants, the presidency. Many conservatives viewed this event with great alarm. As a result, they were less than displeased when months after taking office Bentsen was deposed in coup led by a cadre of relatively junior military officers. The "Colonel's Coup" as it became known, was led by Army Colonel Jorge Walker Bush, who (as the scion of a wealthy, internationally known family) became the public face of the new regime.

The exact fate of Bentsen remains unknown, although he is believed to have been killed while military police stormed the Presidential Palace in Santa Fe. Claims that he committed suicide to avoid capture have always been hotly denied by his family.

Bush initially held the more-or-less traditional role of Chairman of a junta, but within a few months this began to change. A restructuring occurred as the new leaders of the nation purged the military and bureaucracies of many senior officials. Some vanished, while others were incarcerated and still others were forced into retirement. Many simply fled the country. Bush himself resigned from the army to assume the civilian title of President, amid promises of new elections.

When Jorge Walker Bush took control of the Tejano government one of his first acts was the nationalizing of all financial institutions. During the Bush regime BNT served as a nationally owned credit-association.

Said elections took place in 2000, by which time a new political party had been formed--Partido Federal ("Federal Party") which pursued a policy of "national unification and glorification of Tejas and her peoples." Part of this policy was a swiftly mediated peace treaty with Mejico which the party proudly proclaimed as an unmitigated triumph (most outside observers called the war a draw). All other parties were openly persecuted by the government. That, coupled with at least some fraud (exactly how much is a matter of dispute), resulted in a Federal Party victory, which in turn meant a Congress that authorized Bush to rule by decree.

Practically, this meant that minorities rapidly lost most if not all rights. Teaching of languages other than Castillian was forbidden. Increasingly, the Ministry of Justice began compiling lists of "Persons Dangerous to the Nation," whose members had no civil rights whatsoever and were under constant surveillance and limits (such as needing official permission to give interviews, leave their home town, marry, etc.). At the same time, the Federals cracked down on Mormons, Ecotopians, Socialists and Labor Unions. Since the fall of Bush, it has come out that many dissidents who were summarily murdered by the state had their children adopted by lower level members of the Federal Party leadership and their allies. Military spending, based largely upon credit with the entire resources of the nation used as collateral, swelled. To aid with these policies, Bush and his administration actively sought to foster a new cadre of government professionals who owed their success to the Federal Party. One of the most prominent of these was Lieutenant Colonel Alberto Gonzalez. 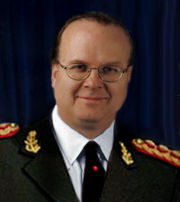 Carlos Rojas, Vice President of Tejas
The crackdown on dissidents within Tejas proved so successful that by 2002 the Bush Regime, facing economic woes, increasingly looked to Alta California as a new source of blame for the nation's ills. His own increasingly extravagant lifestyle did nothing to quell the problems his regime faced.

In 2003 the war with A-C did indeed begin, and proved a disaster. Military analysts pointed out the weakening of the non-coms, poor management and logistics, sub-standard equipment and the tendency to promote based on political reliability as major reasons for the losses suffered by Tejano military units. When Mejico also entered the war as an ally of the Alta-Californianos, what little hope remained was lost.

Apart from Bush, most of the hatred against the Federal regime was aimed at his Chief of Staff, later Vice President, Carlos Rojas (1950-2005), who committed suicide with a cyanide capsule soon after being taken captive by A-C troops.

Federal Party symbol
One of the first acts by the new provisional government of Tejas was to ban both the Federal Party and their (by then) notorious symbol of the star and wreath.

In 2000, Bush senior became fed up with the state of affairs in Tejas and pulled out of the country. This left quite a ding in the production capacity of the remaining industry and is undoubtedly a contributing factor to Tejas's downward spiral vis-a-vis A-C. Jorge was captured and later executed by a military court in Méjico (2004).

Rumours have blossomed that President Jorge Bush of Tejas was now living in exile in la Habana. These rumours were later found to be true when he was extradited to Mejico City to face trial for war crimes.

CIUDAD MEJICO - The Mejican government announced this morning that, acting in concert with its Californian allies, it has crossed the Rio Grande into Tejan territory. The spearhead of the invasion centered on the eastern half of Tejas, which fell "like a child's hut in an earthquake," according to one military official. The newly created military province stretches in a line from Presidio to San Antonio and up to San Ignacio at one of Tejas and Lousianna's major border crossings. Mejican forces control Tejas from this line to the coast, as well as the state of El Paso, a little to the west of the military province. It remains only to see whether Tejas will sue for peace or if California will press this new advantage first, keeping in mind that western and northern Tejas are very well armed and defended.

The infamous Roberto Gonzales of Radio El Paso blew his usual steam this afternoon, saying "...there are _no_ Mejican troops invading the city! How can that be!? Mejico is a weak nonplayer in this great war against California, which we are closer to winning every day." Shortly thereafter, Mejican troops seized the Palacio Real and the power and water stations, sending El Paso into an afternoon blackout.

Our agents in Santa Fe, the Tejan capital, report that local newspapers and radio shows are all reporting that business in Tejas is as usual. While the Tejan press has been silent on the matter, it was noted that a small fleet of airships were seen rising from the Palacio de la Santa Fé and headed to the southeast at speed. Their destination is unknown, but it has been speculated that Jorge Bush, his family and his inner circle of advisors have fled the capital and are at this time flying towards La Habana in Cuba; military officials refuse to comment on this fleet of airships, its desitnation and its fate, if it has been captured or destroyed.

Curiously, the Floridian press have been uncharacteristically quiet the last few days. Last week, when Tejas was indeed making progress in California, Floridian newspapers were squawking with glee over the seeming end to California. Since Monday, they have concentrated solely on domestic issues.

As a side note, our agents in Nouvelle Orleans report a number of suspicious activities late at night in and around the venerable city. Also, Louisianans in that region have expressed alarm at the large scale militarisation of the border with Florida, and the increasing numbers of "black strangers" passing through the bayous at night. The local press have passed them off as nocturnal hunters or Louisianan military personnel playing wargames near the border; but the locals remain skeptical, as these strangers have been moving to the northwest, rather than from the northwest.

Speaking from exile in Philadelphia (NAL), the heir to the crown of Tejas, Doña María Isabella, has once again expressed her dismay at the actions of the Bush regime, her sympathies for those in Mejico and California that have suffered at her countrimen's hands and her desire to heal the great injury done to Tejas during the last fifty three years of tyranny. When asked if she would petition Mejico to return to her country, she skillfully avoided the issue by saying that the Mejican government and military had fairly captured Tejas; and that she has long been contact with high officialdom in the Mejican government, but no firm plans have been made.

Following the decimation of the Bush regime, a movie was hosted on Latin America's "AyE" Artes y Espectáculos, "The Rise and Fall of the House of Bush", with the tagline "No somos una dinastía, que son una forma de vida" which translates to "We're not a dynasty, we are a way of life."