Barnardo Azul (born 1959) is an artist from Montrei, distantly related in Gwilliam Lyon MacDowell through his father, a chief petty officer in the Solemn League Navy who emigrated after the Second Great War. Azul was born and raised in San Francisco, but is mostly self-educated having dropped out of school at age 16. Among his insterests are celtic music (he plays several instruments, including the guitar, violin and bagpipes) and medeviel history. But he is best known by far for his painting and illustrations of The Lord of the Rings and other words by J.R.R. Tolkien. 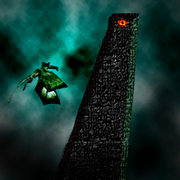 From 1979 through 1987 Azul was an increasingly successful book cover artist, particularly of fantasy. Some of his covers included Montreian and Alta Californian editions of such classics as The Worm Ourosboros and The Mabinogion as well as a lavishly illustrated edition of The Illiad. But in 1987 he was chosen as one of two illustrators of a massive centennial edition of Tolkien's The Lord of the Rings. Since then he has also illustrated a full-color The Hobbit as well as The Silmarillion. More, he published a collection of watercolors and pen-and-ink sketches in a book called An Illustrated History of Middle Earth which is widely viewed as among the best collections of Tolkienesque art. He has also become one of the favorite artists for Tolkien calendars and his covers for four different editions of the trilogy itself are viewed as among the best.

One particular quality Azul is noted for is startling, unusual composition with great detail supplied for things like branches of trees, nuanced color of skies and a use of light that recalls Veermeer. Many critics have noted that his paintings seem otherworldly yet convey a very strong sense of texture. His medium of choice is generally watercolor.

Mr. Azul resides in the small town of Santa Rosa, north of San Franciso, with his wife Beatrice, a musician. They have no children but share their home with ten cats of various ages. Both are moderately active in the Ecotopic Party. He has three sisters and one brother.