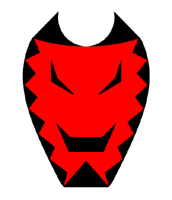 Baphomex' Mask as it originaly appeared

Baphomex, The Patron Saint of Thieves. A fallen angel who rules the Neofrancian underworld through strength and the use of his supernatural power.

Created by author Augustin Lenoir in 1921, Baphomex is actualy Romuald Du Tilly, the last descendant of a long line of thieves who put on the costume of Baphomex to rule his criminal empire. By the judicious use of stage magic and a large network of informers and retainers, the Du Tilly family has managed to convince its underlings that Baphomex is endowed with supernatual traits such has immortality and omniscience.

In addition to the novels, Baphomex has appeared in illustrated albums, newspaper strips, films and a few television series and specials.

Baphomex's mask, while receiving minor changes from one incarnation to the other, is distinctive enough to be easily recognizable. Reproductions of it are often sold in novelty shop for Mi-Careme parties and the mask can also be seen as adornment for objects such as lighters and ashtrays.

During a political scandal in the early 1950s, a famous cartoon showed the then financial minister removing a mask of Baphomex.

With new ones written by other authors coming out every years or so, The Baphomx series numbers in the hundred. Follows a partial list starting with the earliest:

The novel that introduced Baphomex to the world. Romuald du Tilly's father has been killed under mysterious circumstances. His faithfull butler must quickly teach Romuald all the family's secrets to prevent a gang war that threaten to destroy the elder du Tilly's criminal empire.

This novel introduces Baphomex's recurring arch-enemies: The Cherub Club. Its members have managed to convince the world that they are a fraternal society that perform philanthropic work. Unbeknownst to all, they do this to hide their true purpose: to take control of the neofrancian criminal underground.

Baphomex decide to steal the French Crown's Jewels while they are being exhibited at the LoNE headquarters. But before he can accomplish his misdeed, they are stolen by someone else. Investigating, he stumbled into the affairs of the mysterious Priory of Saint-Louis, an ancient cabal who is determined to restore the true king of France to his throne. Who are these men and what nefarious plans do they have for the current Pretender ?