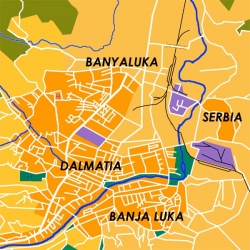 Map of the divided city of Banyaluka

Banyaluka's railway station arrangement is rather interesting, and quite possibly unique. This city itself is divided between Serbia and Dalmatia (similar to how Toarzac is divided between Dalmatia and Croatia), but the railway station lies just barely inside the Dalmatian part. When you get off the train there and enter the station building, you have to go through the door on the left if you're going to Dalmatia, the door on the right to go to Serbia. Before you can go through the doors you have to present your train ticket, so they can determine whether you have to go through customs or not. This arrangement works, but isn't quite satisfactory, so the Royal Serbian Railways have begun building a large new station at the suburb of Incel right before the border (7/9 verst), which will become the (Srpska) Banja Luka station; at present there is no station there, just a short platform used only by the Doboj-Banja Luka local train.