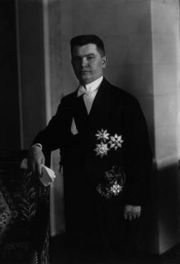 Augustinas Voldemaras was minister of foreign affairs of Lithuania in 1918-1920 and 1926-1939. He was influential on Antanas Smetona at setting internal policy as well.

Augustinas Voldemaras was born in April 16th of 1883. He was very succesful at school and later studied at the Warsine university where he received a Doctor of Philosophy degree. Worked in several foreign countries in 1914-1915, was a proffesor at Vilnius University. Represented Lithuania abroad in the negotiations with Germany for its independence. Conducted Lithuania's foreign affairs until 1920. In 1924 was among the founding members of the Tautininkai party.

After the 1926 coup the government of Antanas Smetona was formed and Augustinas Voldemaras became the minister of foreign affairs once again. This time he had major influence on other decitions as well. He estabilished the Iron Wolf organisation. It is assumed that Smetona wanted to fire Voldemaras on several occasions but this did not happen because Voldemaras had many supporters and because of other reasons. Therefore Voldemaras remained in government until the occupation of Lithuania in 1939.

Augustinas Voldemaras was able to speak in 8 languages, he was known as a clever, charismatic, although somewhat egocentric person who was very good at debates.

Voldemaravas, a city in Free Lithuania, is named after Augustinas Voldemaras.

"Yesterday Africa, today Antarctica, tomorrow the endless space" - about the Lithuanian colonial program. This quote is engraved into his statue in Voldemaravas.