Atomic Weapons are among the most fearsome weapons technologies ever developed and have been used several times during the course of the last century, despite a near-universal revulsion towards them (akin to that against gas warfare following the First Great War). They are classified as Weapons of Mass Destruction. 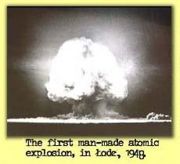 Atomic weapons are classified as RA weapons, or "radioactive weapons"; they include all kinds of weaponry that spread radioactivity, either directly by atomic processes or by spreading radioactive materials. Generally speaking, atomic weapons range in the 15 to 60 kiloton range of power. Some scientists theorise that weapons into the megaton output could be produced. Thankfully, none have yet been produced.

In modern times, the RA weaponry is usually split into two categories, Strategic and Field categories:

Strategic RA Weapons are typically higher yield weapons, in the multikiloton range, dropped from combat airships and have larger yields. Some experiements with launching such bombs catapault style from ships or submarines have been carried out. Rocket carrying atomic bombs are the stuff of science fiction writers, but undoubedtly would be advocated by military officials.

Field RA Weapons are low yield weapons that are intended for use on the battlefield rather than as a weapon of mass destruction. These weapons could be launched from special artillery units, ships, or deployed as mines or bombs. They are designed to harm the enemy army through radioactivity, to render some vehicles or buildings uninhabitable for several days. Typically, they are bombs that spread radioactive or dirty materials rather than true atomic weapons.

The first such weapons were invented by the Holy Roman Empire during the Second Great War. In an act of utter desperation towards the end of that war, Adolf Hessler ordered the Luftwaffe to drop an atomic bomb on the city of Łódź, Veneda's second largest industrial city, where the Russian military headquarters were established, on 18 October 1948. Over 55,000 people were killed, and the city's entire historical centre was devastated. The atomic bombing of Łódź was followed by a vast military offensive, which forced the Russian troops to retreat. However, this was only a temporary military setback as the White Air Force had already destroyed the vital heavy water production facility in the HRE, making construction of further such weapons impossible. Horror at what the weapon accomplished also helped motivate military and political officials to depose Hessler soon afterwards.

This weapon was derived from an involved, intensive process to extract/create the element U-235. Because of the process involved, such devices are also known as "nuclear fission bombs".

During the Great Oriental War, similar bombs were used by the Austronesian League against China. Unlike the previous European use, this explosion of a weapon over Beijing brought the war to an end. It is speculated that the "Beijing Bomb" was produced in Germany and seized at the end of GWII.

In the Bornei Filipinas War, Russia and the CSDS each dropped a nuclear weapon against each other, on Filipinas' soil.

After a lull of some twenty years, atomic weapons saw a great proliferation of use: during the Cantonese War of 2003; the Florida War of 2004; the Second Patagonian War of 2007. It has been further speculated, and supported by some documentary evidence, that the bomb(s) used in during the Florida War were obtained by the Floridian military from the Germans in the 1960s.

It has been pointed out by citizens' organisations and the press that whereas the world saw hardly any atomic weapons use in the XX century following the end of GW2, the XXI century has seen the use of many more in less than a decade. The League of Nations and other international bodies view this trend with increasing alarm and are considering steps to check their use. What makes some even more concerned is the theoretical invention of a fusion bomb which would be many times more powerful than the fission bombs currently known to exist.

These come from figures released by their own government.

As with any other facet of life, literature takes up and explores themes that people find interesting or important. Atomic weapons are no exception, and there are many examples of their use in fictional writing and film.