Monasteries are a historically important component of the Assyrian Church communion, frequently serving as bases for the spread of the church in new areas. Many of the most influential Patriarchs of Seleucia-Ctesiphon have come out of the Assyrian monastic tradition, including Mar Babai I, Mar Bardaysan X and Mar Timothy III, and the tradition is at times quite different in ethos and organisation from the monastic traditions of the West.

Unlike its Western (Catholic and Orthodox) counterparts, the Assyrian monastic tradition has been one of service and engagement with the world as much as of quiet contemplation away from it. To the Church of the East, a monastery or nunnery is a place where those specially called of God can participate together with their Lord in his business, "doing what they see the Father doing", just as their Saviour did. This has involved everything from soup kitchens for the homeless in inner cities, through free medical clinics for the poor, to literacy and education programs, to research libraries.

This is not to say that Assyrian monks and nuns completely neglect the spiritual and contemplative aspects of the monastic calling. Rather, it is the norm that contemplation and service are intertwined and interdependent, and members of the Churches of the East generally feel that it is at best unwise to try to separate the two.

Because of their dual focus both on knowing God and on doing his work, the Assyrian monastic movement is highly missionary in nature. Historically, monasteries have often been the first Church infrastructure in a new region of the world, and have served as bases from which the monks (and nuns) have undertaken the spread of the Gospel message in the community around them.

This missionary role of the monastery continues to this day in large parts of Asia, particularly those which are on the fringes of the Christian world. It must be noted, however, that many governments of Islamic, Hindu, Buddhist or other non-Christian nations are becoming increasingly wary of permitting the establishment of Assyrian communities within their borders, even considering all of the monasteries' charitable works with the poor. Non-Christian governments typically desire to have the monks for their medical and literacy work, but are hostile to the inevitable spiritual side of what they do. Even several governments of Christian states which have no tradition of the Assyrian branch of the faith have been wary at times of encouraging such an intentionally missionary form of monasticism, though in all fairness, current Assyrian Church policy frowns on attempting the "conversion" of other denominations of Christian.

One of the main means by which an Assyrian monastic community will reach out to the city, town(s) or villages round about is through acts of service. The community will actively seek ways in which to serve their neighbours, whether that be through mercy service to victims of natural disasters, literacy and education programs, or medical work.

Historically, most of the early Assyrian monastic communities included a hospital and library, in order that the monks could serve the wider community through healthcare and education as well as through prayer and missionary work. Modern Assyrian monasteries and convents keep up this tradition, and have expanded on it, serving their communities through everything from shelter projects for the urban homeless to adult literacy to advanced medicine and surgery.

This is where the various Disciplines come in (see Disciplines below). Each monastery will have various of the major Disciplines represented, depending on the exact nature of the community in which it is placed. 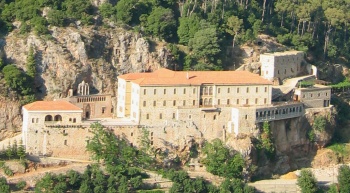 Unlike Western monastic traditions, particularly Catholic, the Assyrian monastic movement does not have Church-wide Rules and Orders as such, having instead a system at once looser and with more oversight.

In effect, each monastery or convent is its own Rule and Order, and the individual hegumens are given fairly wide latitude in setting details of the pattern by which their monks will live, especially when it comes to the monastery's external witness and service. The hegumens and their monks are answerable to the Catholicos and the Metropolitan Synod for doctrine and praxis through the office of the Visitor of the Monasteries of their particular region, and through their metropolitan or bishop. With such wide latitude given to the hegumens, the office of the Visitor is a crucial one, and many of its holders are later elevated to the Patriarchy, including one of the earliest, the much-revered Babai the Great.

The Assyrian monastic movement does, however, have different currents or societies operating within it on a trans-monasterial level. While not "Societies" or "Orders" in the Roman Catholic sense, these do fulfill a similar role in the Assyrian Church, and are often referred to as "Monastic Orders" by commentators from outside the Church of the East communion. However, this implies an organisational model which is completely different from the actual arrangement in the Church of the East. A monastery or convent may well, for example, have monks representing three, four or even more of these pseudo-Orders all cloistered together under one hegumen, working and praying together for their wider community.

The precise role of these pseudo-Orders (generally called "Disciplines"; though again, to Western ears this implies a certain model of organisation) is as trans-monasterial networks of those with the same focus of service and ministry beyond the cloister. The monks themselves, though, while they may be members of a particular Discipline, are organised on a single monastery or monastery-cluster basis. There are also monks and nuns who are of no particular Discipline; some of these have skills or roles that are very location-specific, others are more general in their role, with no particular specialism. This is a matter for the hegumen of the monastery to rule on.

Assyrian monks' tonsure consists of an entirely shaven head. Novices and those taking temporary vows typically leave a short stubble of hair, but full-time monks are expected to be clean-shaven of head.

Assyrian monastic habits are typically grey, the colour of untreated wool. Those monks who are also priests often wear an adapted version of the regular, "workday" priestly vestments, with the black under-vestment replaced with monastic grey. They retain the black waist sash of a regular priest. Hegumens are assumed to be priests as well as monks, and wear white waist sashes with their priestly vestments.

The vestments of a Visitor of the Monasteries are those of a priest-monk, but with yellow facings on the outer vestment and a yellow waist sash (the insignia of a bishop) or with the red facings and sash of a metropolitan archbishop, for the highest levels of Monastic Visitor.

Nuns also wear grey, with a kimeçek (head covering) in the colour appropriate to their level: plain grey for novices, black for regular nuns, white for hegumenesses, white trimmed in yellow denoting a Visitor of the Convents.

Retrieved from "http://ib.frath.net/w/Assyrian_Monasticism"
Category: Church of the East