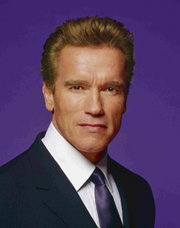 Arnold Schickelgruber (born 1947) was from a small town on the outskirts of Berlin. His father, a Luftwaffe pilot, moved the family to Austria in 1950 and for most of his life Shickelgruber has identified himself as "Austrian." His political rivals like to point out he is in fact Prussian by birth.

His initial claim to fame was as a bodybuilder. In fact, his first fortune (he is a self-made millionaire several times over) was from a series of fitness gyms created and promoted using his reputation as the winner of several contests.

In the late 1970s and early 1980s Schickelgruber slowly broke into acting, initially with cameo roles before finding his niche as a star of action films. Along the way he changed the spelling of his name to "Shicklegruber." Some of his movies were international hits such as:

In 1990 he married Marie Fitzgerald, cousin to former General Moderator Edward Moore O'Kinneide. They have no children.

Always politically active since becoming a naturalized citizen and moving to Atlanta in 1983, he was a major fundraiser for Lord Governor Zeb Miller and campaigned against Miller's successor Howard Provo on behalf of Gwillim Buchanan (of the Alliance for Public Decency). In 1998 he offered himself as the Whig candidate and amidst a very broad field (that year the candidates in the Whig party included a star of adult films and a former child star hoping to revive his career) won the nomination and later the election. His PC opponent was Amy Carter, daughter of the former Lord Governor.

Shickelgruber's term of office was decidedly mixed. He was among those most supportive of the Florida-Carribean War, which to some extent distracted from his failures to get many of his projects through the Progressive Conservative majority in the Senate. After leaving office, the "Watergap Scandal" erupted and he has been the subject of increased scrutiny by the press. This had hindered his activities as Jacobia's newest League Senator. On the other hand, he currently basks in the approval of GM Albert Gore and is mentioned fairly regularly as a possible candidate for the General Moderator-ship.