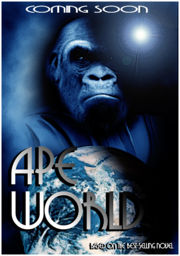 Ape World (1981) was a American-made motion picture based upon the novel by Louis Boulle. It was a huge success, sparking several sequels as well as comic books, an animated television series and various merchandising. The film was rated 12a in the BCFCB Classification System. In genre, the story was an example of science fiction/dystopia, and was virtually adopted by the Anti-Snorist Movement. More than one critic pointed out its parallels to the novel 1994. It was also considered ground-breaking in its production and make-up design.

In the XXIst century, an interstellar craft named Ulysses is launched for Alpha Centauri, aiming for a world believed virtually identical to Earth. It will take the ship two millennia to reach their destination. Lieutenant Francis (Ethan Wright) is the lowest-ranking member of the four-man crew. Yet when they arrive, a malfunction in the cold sleep units has killed the other three. Francis takes one of the pods down to the planet below, which does indeed seem like a twin of his own, but without the massive pollution with which he is familiar. Yet he notes also that large round desert areas dot the landscape.

The pod lands, and Francis explores, keeping a diary. He discovers domesticated crops, and a band of seemingly feral humans who are hunted down by horse-riding Chimpanzees with guns. Francis is taken captive, wounded in the throat so he cannot speak. Two gorillas, Cordelia Mary Spacek and her brother Oberon Stephen Railsback, examine him. They realize he is very different from the other humans, who are mute and cannot write. It turns out in this society, Gorillas are the Scientists and Priests while Chimpanzees are the Warriors and Judges. Orangutans are bound to the professions of Farmer and Merchant. One such, Janus (Howard Draft), eventually frees Francis, who has fallen in love with one of the feral humans--a girl he names Oona (Drew Wilkes-Booth). Very reluctantly, Cordelia reveals the contents of the "sacred archives" to Janus and Francis. Many ages ago, Man was the ruler of this planet until they wiped themselves out with endless wars. Humanity devolved and their simian cousins took over. Oberon, learning of his sister's "sacrilege" in revealing the hidden past to non-Gorillas, turns them in to Colonel Leontes Arthur Lithgow , a chimpanzee officer.

The four fugitives flee into the desert, eventually reaching the pod in just enough time to take off before the Chimpanzee troops surround them. Francis takes Oona, Cordelia and Janus with him via the Ulysses back to Earth, having repaired the cold sleep units.

But as they approach Earth, now four thousand years in the future, the ship malfunctions. They have to use the pod as an escape boat. After they land, Francis is horrified by the sight of the toppled Statue of Justice from New Amsterdam, the home of a few mute humans who cower in terror as a band of Chimpanzees approach on horseback...

Differences From the Novel

Two very strong differences exist between the novel and film.

First, the Ape society portrayed is not advanced technologically, whereas in the novel they are easily on par with modern humans including airships and even atomic weapons. Yet it proved much cheaper in terms of film production to have their culture just entering into the steam age, but with relatively advanced firearms. Second, the central human character instead of being a Louisienne journalist is an American cosmonaut.

A more subtle difference is that the novel's lead feels some compulsion to try and save his fellow humans from the apes, whereas the film character seems more bewildered, trying to do his duty but unused to making too many decisions without guidance from higher authority. Much of his story arc concerns learning what he can of this alien society in hopes of reporting back to his superiors (or their heirs) back home. Falling in love and forming friendships are surprising distractions from that mission.

The film was a gigantic hit, and inspired many merchandising tie-ins including costumes for Hallow's Eve, lunch boxes, comic books and more than a little bit of satire, including skits on Sixty Rokk Live.

Critics were also deeply impressed, noting the film's union of exotic adventure with subtle commentary on the human condition. Many conservatives and royalists found the story offensive, with its implied criticism of authority figures and the violence practiced by man upon man. Religious fundamentalists complained the story was blasphemous (especially the portrayal of the ape religion), whereas Ecotopists hailed the film as a cautionary tale of nature striking back.

By any standards, the film was a world-wide hit, inspiring no less than four sequels: