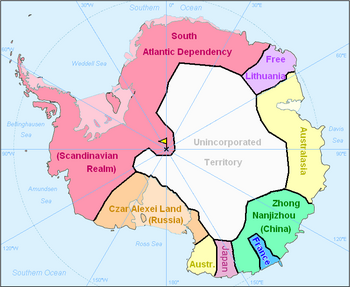 Like *here*, not all of Antarctica has been claimed. In Ill Bethisad, part of Antarctica is a dependency of the Scandinavian Realm, while another part, Zhong Nanjizhou, is a jointly run area between all of the Chinese states. Logically, Australasia will have its share as well. In a part of coastal Antarctica an independent country of Free Lithuania exists, which has about 2700 inhabitants and 2 towns (see Lithuanian colonies for more information about its history); this country claims whole Antarctica to be part of it, but the claim is not recognised by any other country nor enforced by Free Lithuania itself. Apart from that, a few smaller units of not permanently inhabited research stations exist, populated with Russians, Ukrainians, Jervans, Americans, English, Kemrese, French, South Americans, etc. As can be concluded from the coordinates given below, huge parts of the continent are still up for grabs.

Below a few messages pertaining to Antarctica, which can be considered QSS.

How about a research station in Antarctica? _No one_, to my great surprise, has made any claims there. I would hope that AA would be protected from industrial development like *here*. But scientific pursuits would be quite appropriate.

Great Idea! Can I lay a claim to the area of the antarctic from 150-110 deg east? It's called 'Zhong Nanjizhou' This was claimed in the late 19th century by China, and is now a jointly run area between all of the Chinese states. While there is(naturally) very little development there, there is a single village, called 'Bingjing'(Ice Capital). This is a residential area for scientists, and is permanent for about 60% of the residents, most temporary scientists preferring to stay on the mainland. There is a limited agricultural experiment using greenhouses and central heating going on, in order to reduce some of the dependence with the mainland.

Wait! Hold on!
Before you go too far, I'd like to say that I have already claimed Antarctica on behalf of the SR a while back when we discussed colonial claims on South America. Well, at least part of Antarctica is SR territory since details as to how much of it has been claimed by SR has not been discussed by the IB group yet. I say that since Amundsen and his party of Greenlanders and Saamis helped the SR win the race for the south pole, I'd say the SR has the biggest portion. I have already claimed *here's* Island of South Georgia, South Sandwich Islands, and the portions that are Norwegian *here*; Dronning Maud Land, Bouvet Island, and Peter I Island. (All of these would probably have different names *there*). I have also expressed the possibility that the entire Antarctic Peninsula be part of the SR as well since South Georgia and the South Sandwich Islands would be SR territories.

How about a research station in Antarctica? _No one_, to my great surprise, has made any claims there.

I did! For SR. Basically I claimed the Norwegian portions of *here*; Dronning Maud Land, Bouvet Island, and Peter I Island. I also claimed the South Sandwich Islands and South Georgia Island. I also expressed the possibility of the entire Antarctic Peninsula in SR hands.

I would hope that AA would be protected from industrial development like *here*. But scientific pursuits would be quite appropriate.

Whaling, fishing, mining, and fur trade would be SR's businesses in Antarctica - with strict environmental controls in the form of strict quotas on whaling, fishing, and seal hunting.

Whaling, fishing, mining, and fur trade would be SR's businesses in Antarctica - with strict environmental controls in the form of strict quotas on whaling, fishing, and seal hunting.

Remember that a lot of Antarctica is disputed, not that anyone cares much. And anyway, you can have the other side of it.

I just had a look in my atlas and plotted the coordinates you have given for Zhong Nanjizhou (150-110 degrees east). I can see that that there is absolutely no conflict between our claims. So cheers! ;)

Anyways, I think its about time that I too give the coordinates of the Antarctic Dependency of the Scandinavian Realm. SR lays claim to half of Antarctica from 135 degrees West to 45 degrees East. This includes the West Antarctic Landmass, the Amundsen Sea, the Antarctic Peninsula, the Weddell Sea, and *here's* Dronning Maud Land. It is administrated as a territory - a region of the SR not admitted to the Union as a national state but having its own legislature and a head commissioner appointed by the SR's King/Queen. The human population would be concentrated in South Georgia Island (where the capital, Grytviken, is) and the Antarctic Peninsula. The population itself consists of a motley crew of Greenlanders, Icelanders, Faeroese, Norwegians, Saamis, and former FK and NAL nationals. The largest villages are powered by a mix of geothermal energy, Tesla rods, and windmills tolerant of the winds from the furious forties and roaring fifties. They have some limited agriculture using gigantic dome-shaped greenhouses, central heating, and artificial lighting. But the main industries revolve around mining, fishing, whaling, and fur trapping. There is some experimentation in animal husbandry/herding through efforts to domesticate seals.

[...] General Silva-Gonzales has been captured along with a number of officers in his staff. Although some of them, including Silva-Gonzales himself, are severely wounded, they apparently survived the missile attack on the Presidential Palace last night. They are being flown to Bolama where they will be tried. If found guilty of the crime committed against the Cruzan people, they will be dumped in what Chancellor Høgh-Guldberg calls "the SR version of hell" - this being on a nunatak somewhere in the middle of Antarctica where they will be marooned with nothing more than sporadic supply drops of food to keep them alive. [...]