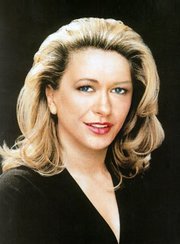 Anaïs Michelle Bouvier Young, wife of First President Jean-François Young. This portrait was made shortly after his inauguration.

Anaïs Michelle Bouvier Young (b. 9 Thermidor CLXXX (July 28, 1962)) is the wife of Jean-François Young, First-President of Louisianne. She has been given the title of La Grande-Dame de Louisianne by the public, who've been nothing short of enamoured with this family.

Anaïs Michelle Bouvier was born into New Amsterdam society, the eldest daughter of Jean-Jacques Vernou Bouvier IV (1921-1977), a diamond broker of French descent who later became heavily involved in the Stocks and Bonds markets, and his wife, Marguerite Buhlmann Bouvier (1936-present), a bank president's daughter. Her parents divorced when she was young and her mother remarried the Émile Antoine Cosson, a reputed Senator of Louisianne.

As a child, Mme. Young was a well-trained equestrian and loved horses (and still does, even as an adult). She won several trophies and medals for her riding and the ample land on the family plantation in Loire-Neuf gave her something to appreciate at the home of her stepfather. She loved writing poems and apparently adored her adoptive father. Her mother was said to be old-fashioned and strict, instilling in her children a strong sense of etiquette, manners, dress, and upper-class customs. While she and her father had a warm and affectionate relationship, her mother was apparently more controlling.

After being named "Debutante of the Year" for the 1979-80 season, she was educated at the finest schools, eventually graduating from Georgetown University, with a degree in art in Virginia in the NAL. With the blessing of her stepfather, she studied at the Sorbonne in Paris for a year, and returned to Louisianne where she met and was shortly thereafter married to her husband. Her stay in France is reputedly one of the happiest moments of her life; she learned a great deal and developed a deep love for France and its culture, a love that would later be reflected in many aspects of her life, such as the menus she chose for state dinners and her taste in clothing. She speaks French, Spanish, English and Dalmatian fluently.

The Youngs did not have children until about 3 years into their marriage, wherein their first son, Jean-François, Fils was born. Frankie was the first of the Young's four children: Jean-François, Fils (Frankie) (1983), 22; Anne-Laure, 19 (1986); Richard Alphonse, 16 (1989), and Karl Christophe, 13 (1992). The first few years of their marriage were spent in the middle-class row-houses near the capitol complex in Paris-sur-Mizouri.

Despite the great honor of the title, Mme Young does not enjoy the title, feeling it says something about her size or demeanor, or both. As she has been forced into a newly-found limelight, she has become a trend-setter for the women of Louisianne and neighboring countries. With her favoritism to haute-coûture, be it French or other,some would say she's neglecting the fine designers and hard-workers of Louisianne. She has clothing from Bergdorf Goodman, Yves Saint-Laurent, Gianni Versace, Christian Dior, and others.

In Ventôse of CCXIII (early March 2005), Mme. Young lead television viewers in a tour of the Presidential Residence that was rebroadcast on Télétoile 2, Louisianne's first geo-synchronous satellite. This broadcast was passed to the world as a whole. Since coming to the Presidential Palace, Mme. Young has sought to redecorate the palace, bringing a sense of pride in Louisianne's past and hope for its future. Having focused on historical art in her studies, Mme. Young has brought in pictures of prior first presidents, noteably Armand Beauvais and Henri Samuel Truman. She also brought in pictures of visionaries like Benjamin Franklin, a founder of the NAL.

Knowing that her children would be in the public eye, Mme. Young has sought to shield them from the prying eyes of the press and popparazzi. Despite this shielding, she has thrust herself and her husband before the world, participating in such noteable state dinners as that with Her Majesty the Emperor of Japan, as well as other dignitaries and celebrities from around the world.

Some would credit the Louisiannan Renaissance in great part to her drive to renew and ingrain culture upon Louisianne, harking to its French heritage. Most recent in this cultural movement is the televised tour of the Presidential Palace, where Mme. Young has brought period pieces and has furnished the whole in the Victorian Era style, with fine paintings of prior first presidents, as well as great historical pieces. She has been actively recruiting support to the flagging Devereaux Society, which has museums across the face of Paris-sur-Mizouri and is looking to build La Grande Musee de l'Histoire Aeronautique in nearby Yonne.

Following the assassination of her husband in the summer of 2006, Mme. Young has dropped from the public eye, however, she has been seen at socialite functions at the winter holidays. She and her children remain under protection from the Republican Guard at the request of First-President Marie-Claire Gildersleeve.