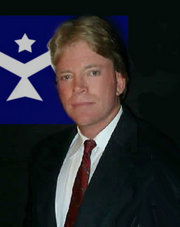 The American Snorist Party (or, to give the group its official name, the Slavic National Order Reserve) is the most well-known fringe political party in the NAL. Its claims no more than ten thousand members, which even if true and if concentrated in just half a dozen or so provinces, make it hardly a force to be considered in terms of members. However, it has created an impact simply by its tactics of goading others into a response.

Founded in 1979 as an offshoot of the United Black Star Societies of America, the group began essentially as a splinter of a fringe group. However, with the rise to leadership of Dmitri Duke in 1990 the party has gained a much higher profile and enjoyed some limited successes. Duke, a former real estate agent from Les Plaines, quickly become the party's Secretary of Propoganda (he later changed the title to Minister of Information) after joining the group in 1986. During his tenure in that office party membership almost doubled, which helped persuade other members of the chief governing body--the Blue Council--to elect him Leader in 1990. Since then, he has brought considerable publicity to the American Snorists by a variety of tactics, including challenging the tenure of professors who were in any way active or supportive of the Anti-Snorist Movement. He designed a uniform loosely based on paramilitary uniforms of Russia, and held demonstrations in very public venues, particularly in the vicinity of synagogues or Afroe communities.

The core beliefs of the party have been espressed in numerous pamphlets handed out at rallies and in unsolicited mailings. In essence they are:

It should be noted no member of the Russian government, past or present, has ever offered any support to this group. They did manage to get Duke himself to the provincial Assembly in Jacobia from Hazzard County, but he was defeated for reelection in 1996.

Following his electoral defeat in Jacobia, Duke began to change tactics. The ASP began increasingly to seem more "mainstream" in its approach, trying to emphasize the celebration and teaching of Slavic culture. The uniforms were seen less and less. The armbands gradually gave way to ties and lapel pins.

This was not welcomed by all the groups members, however. In 2003, a faction that had called themselves New Homelanders formally split from the Blue Council and Duke. This faction advocated creating a slavic province or nation in the unincorporated territories, and defending same by force. Under the leadership of failed movie star Mikhail Medved this new faction dubbed itself the New World Order and has so far engaged in no conventional political activities at all. But they have, according to the CBI been stockpiling arms and designing military insignia.

Oddly enough, both groups tend to accuse the other of being "racially impure," which most ethnologists who've looked into the matter say is absurd. Both groups use such extremely vague and unscientific means to determine the existence and degree of "slavic blood" as to be meaningless.

In March 2006, the NWO became the focus of world-wide attention relating to crimes committed in and around Boris Hill in Ontario. The resulting publicity has made all so-called American Snorists objects of loathing as well as dark fascination.