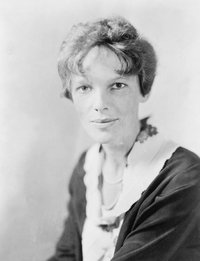 A portrait of Amelie-Marie Earhart.

Amelie-Marie Earhart was born the 5 Thermidor CV, and grew up in the small town of Arles-le-Rive in Nouvelle Gaulle, Louisianne. She was quickly captivated by planes, and began seeking to pilot them. Passed over as a potential pilot for Louisianne during the First Great War, Amelie served as a nurses aide, and later pursued aviation with vigor. She was the first woman to gain a pilots license and quickly gained notoriety the world over as she first flew across the Atlantic, and then around the world.

Mme. Earhart was married 28 Pluviôse, CXXXIX. Following her circumnavigation that passed over Asia to the Sandwich Islands (modern-day Kanawiki), Alta California and back to Louisianne, Mme. Earhart applied herself to the study and advancement of aviation.