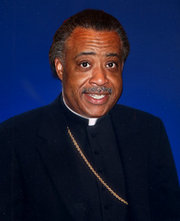 Bishop Alister Sharpton, Lord Governor of the Province of Jacobia

Alister Sharpton (born 1954) was from a Middle Class family in Atlanta. His was a deeply religious family and young Alister was groomed for the priesthood from an early age, when he first expressed an interest and flare for preaching. He was also very social and given to organizing, even in school when he led a protest against a dress code. This was soon after his family suffered a trauma. Alister Sharpton's father left his family, forcing the family to apply for public relief. Yet, as a superior student and one drawn to the social activities at the old St. George's Cathedral in Atlanta.

Sharpton attended Christian Brothers College and the Crown of Thorns Seminary before being ordained in 1978 in the Cambrian Rite for the Diocese of Savannah. He was himself appointed Bishop in 1991. Throughout his career he has never shied away from making use of the prestige of his collar. Savannah, being a city of considerable constrasts, has factions which often come nearly to blows. Father, then Monseignor, and finally Bishop Sharpton made himself known as a diplomat in this environment. 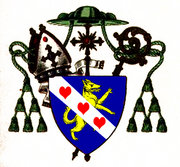 His real claim to fame, however, came in 1998 in the case of Tyrone Brawley, an afroe youth who claimed to have been kidnapped and tortured by a local chapter of the infamous Black Star Society. More, he claimed to be able to identify his attackers. In a province still reeling from the Geoffrey Dahlstrom Murders, these accusations stirred up hideous memories. Tyrone Brawley claimed sanctuary with Bishop Sharpton, claiming to be afraid of the police and city officials. It was Sharpton who, in long talks with the young man, persuaded him to confess that the accusations were false, an effort to distract Brawley's abusive stepfather.

This case created considerable prestige for the Bishop in Jacobia, and when the Watergap Scandal broke leaders of the Progressive Conservative Party approached Sharpton about running for the Lord Governorship. Their argument was that he would be a unifying force in the province which, like Savannah, was increasingly divided. At length he agreed and was elected, taking a sabbatical from his office. He is currently one of the most well-known members of the Progressive Conservative Party and one of those considered completely untouched by the further revelations about Watergap. Most pundits agree that he could, if he so chose, pursure a successful career in NAL politics. He himself has declined to discuss the matter.

Sharpton's administration has focussed on compromising between different elements while pursuing an agenda aimed at causes of problems.