Alia Valentina (b. 1883, d. 1945) was a motion picture and stage actress from Xliponia. She was née Alia Balençina in Bailvunn near Hastr, but changed her name to a more internationally pronounceable version when she entered show business. Tall and majestic, she achieved great acclaim on the European stage (including many renowned productions of Shaxepere) which she later translated into film stardom when contracted by Metropolitan Moving Pictures. She never married, and is generally believed to have been a lesbian. Certainly she had several extremely intense friendships with younger women and in private life liked to dress in "male drag" (although this was not so unusual at the time). On the other hand, commentaries about an affair with Otho VI sprang up around 1925 and were never quite silenced until the present day. 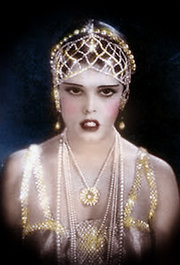 Valentina was a very handsome woman in her 40s when she made her motion picture debut in The Portrait of Valerie (1924). She had fled Europe in the wake of the First Great War and carved out a position for herself in the New Amsterdam theatre world. At first, speaking little English, she learned her roles phonetically. However, within 18 months she had mastered the new (to her) language, her fifth as it turned out. She retained an accent, but it was slight, just enough to make her exotic and to help in finding her roles on radio. This, plus her stage work, brought her to the attention of motion picture casting scouts.

The Portrait of Valerie was an international sensation and Valentina shrewdly parlayed this into a lucrative contract. A shrewd business sense left her quite secure, and over the years she became a major stockholder at MMP as well as the owner of several important pieces of real estate. She also deliberately cultivated an aura of mystery and glamour. She even kept a pet cougar whom she named Drusilla.

Whatever her sexual preferences, she often had friends staying on her Breuckelen estate, and to be sure many of them were upcoming young starlets like Jayne Barlowe and Faye Wright. The main house was the site of many a fairly wild party (her Hallow's Eve parties were special events and an invitation meant instant status), while three bungalows served as guest quarters for her friends. More than one visitor noted that the whole place seemed designed for privacy.

When the talkies came, Valentina easily survived, having a rich contralto voice she could use to great effect. The Last Czarina (1932) was her first sound "hit" and it wasn't her last. Nor did it hurt that she retained her looks and figure (swimming was a passion and her estate included a large pool).

Her longest relationship was with Natalia Varney (b. 1911, d. 1951), her personal secretary and assistant from 1930 until 1940 when Varney became a producer at MMP. The two met at a theatre party in New Amsterdam and within a few months were inseparable.

Diagnosed with cancer in 1945, Alia Valentina took her own life by swallowing sleeping pills with brandy. Her funeral, although private, was evidently a very emotional affair for her many friends. Gossip columnists noted that a very high number of pretty women were among the attendees (most failed to mention many of the most dashing leading men of the film industry also attended). Natalia Varney openly wept and kept a portrait of Valentina in her bedroom for the rest of her life.