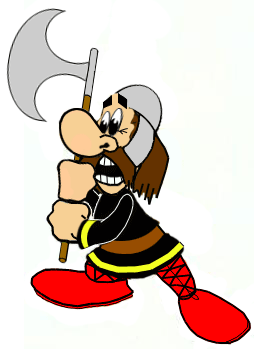 Alegoric the Frank is a series of historico-humouristic comics created by frenchman Umberto Gosini in 1959. It was first published episodicaly in the pages of the magazine Renalbert Hebdo and then collected in albums. Later, original stories were published strictly in graphic novel form. To date, there have been more than 30 albums published including the anthologies.

Introductory prologue in each album:

In the Dark Ages, with the fall of the Roman Empire, all of Europe is in chaos. All of it? No. One Frankish county strives again and again to bring order to the continent.

The series follows the adventures of Alegoric, a squire at the court of a frankish county during the Dark Ages. Through him we see the other inhabitants of the castle such as the gigantic count's son (and Alegoric's best friend) Volumetric, the incompetent cook Acidgastric, the devious captain of the guard Egossentric, the alchimist Esoteric and the well-intentioned but naive Count Geriatric.

Alegoric's adventures tend to fall into one of two categories: Quest and Defence of the Realm. In the former, Alegoric and Volumetric visit another realm in search of someone/something at the request of Egossentric who did so in a bid to get rid of the royal heir. Invariably, the two friends overcome all obstacles and come back safe and sound. During their quests they often meet characters that are parodies of modern-day public figures born in that country.

In the "Defence of the Realm" type of stories, the Barbarian Chief hatches a new scheme to invade the kingdom or one of its neighbours only to have him and his horde duly beaten by the assembled paladins. Often this type of story ends with the neighbour realm's monarch swearing fealty to Count Geriatric thus bringing yet another piece of land into their orderly fold.

During their adventures, Volumetric displays a superhuman strength. This comes from his possession of the mund, a supernatural power posessed by every member of the Frankish nobility. As mund is believed to reside in a man's hair, Volumetric's ample mane (which continuously grows due to one of Esoteric's potions) gives him powers beyond that of any normal man.

A small level of criticism (mainly from the south of France) has been heard over the years claiming that the series had a subtext of Francian imperialism. Gosini (whose name attest his Jewish-Italian decent) has defended himself against these accusations and points to the international success of the albums as proof that far from offending others, Alegoric's adventures have a universal message.

One subtext to which he has admitted was a Pro-European Union bias in the adventures. Gosini has often claimed that he had envisioned one day finishing the adventures of Alegoric with an epilogue in which we could see one of his descendants becoming France's deputy to the European Parliament. Due to Gosini's sometime dry humour, no one knows if he truly meant it.

said by Volumetric when shown something new which the reader knows to be a bad idea.

Said often by Egossentric when out of earshot.

Said by the Barbarian Chieftain after being beaten, yet again, by the Franks.

The albums have known a large distribution in the countries that form the Gallosphere but due to the nature of the humour, which relies strongly on puns and cultural references, it did less well in foreign-language countries.

Nevertheless, some publishing houses have released translated albums that managed to convey the original meaning well, often acquiring a small but faithful following.

On the subject of translation, some bilingual fans of the series have commented that the Dalmatian translation is funnier than the original.