Aeroscraft on the tarmac at Joseph F. O'Kinneide Jr Aerodrome in New Ansterdam 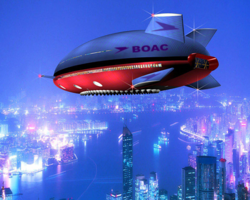 Aeroscrafts are not ordinary blimps. Unlike typical airships, the Aeroscraft stays in the air owing to both aerostatic and aerodynamic lift.

Its 14 000 pc³ of helium hoist only two thirds of the craft's weight. The rigid and surprisingly aerodynamic body—driven by huge rearward propellers—generates enough additional lift to keep the behemoth and its 2000 tl payload aloft while cruising. During takeoff and landing, six turbofan jet engines push the ship up or ease its descent. More luxurious versions can contain 150 to 250 passengers with restaurants, casinos, boutiques and even pools! More economic versions contain up to 500 people on board. Those for military usage can upload 1000 people on fifth decks or 500 people with 100 tl of equipment. The craft have a range of several thousand miles and, with an estimated top speed of 174 mph, can traverse the continental NAL in about 18 hours. To minimize noise, the aft-mounted propellers are electric-powered by Tesla Generators. A sophisticated buoyancy-management system serves the same purpose as trim on an airship, allowing for precise adjustments in flight dynamics to compensate for outside conditions and passenger movement. The automated system draws helium into compartments throughout the ship and compresses it into storage tanks in order to manage onboard weight.

Originally designed by Montrei’s company „Areos Panmondi Aviata”, it is now produced by many manufacturers around the world under the Inventor's Licence. After FK's Rolls–Royce Company had given their jet engine to aircrafts, BOAC bought the first part of the new “airship”. Only big and rich airlines can afford to buy Aeroscrafts. Nowadays BOAC has 12 of them, the biggest number of operating Areoscrafts under one brand. Others, like Lufthansa and Air Louisianne have several of them and Venedair S.A. is due to buy one after modernization of Jagiełło Aerodrome in Warsina.

Rolls-Royce partnered with Tesla-Westinghouse in the development of the special engine created for this craft to allow a perfect technological mesh with the Tesla Generators.