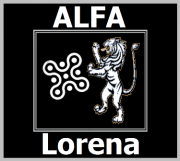 Alfa Lorena was initially a Lombard and later Italian car manufacturer, founded as A.L.-F.A. (Asienda Lombarda-Fabrega Automòbil, or Lombard Brand-Automobile Factory in English) in 1910. Once one of the greatest names in motor history, ALFA Lorena has had a reputation for sports cars, having a fantastic racing pedigree to back it up.

Classic pre-Second Great War ALFA Lorenas included many of the best designed cars of that period. After the war, the company changed direction from production of bespoke and exclusive cars and re-oriented itself around cheaper and more manufactured cars, although never leaving the up-market automotive level. Limited series of cars under some of the most famous coachbuilders' body shells kept the brand image alive, but ALFA Lorena became bankrupt after fifty two years of existence.

Corean Kïa-Hiendai Group bought the rights of the name and revived it with success in the 1990’s although never with the same aura of myth as before.

It launched the first model in 1910, a luxury car, aiming to court aristocrats and businessmen as costumers. By the next year, the company started participating in car racing to great success. With the warfare caused by the attempt of Italy’s unification by Benito Mussolini (1916) the company started to supply the Lombard army with trucks, granting an increase of profits soon used for the launch of new models.

During the 1920’s, ALFA (as they were now badged) cars started to receive body shells made by some of the most famous coachbuilders in the Italies, beginning ALFA’s golden age.

During these years ALFA grew in sales, producing several hundreds of cars (and dozens of trucks) per year and becoming the second largest car maker in the Italies (but far far behind Piedmontese FTAT).

With the fall of Mussolini’s Roman Republic and the end of hostilities, Mazzotti and some other racing enthusiasts established an endurance race in 1930 between Brescia and Rome (in the Papal States) and back, the Mille Miglia. An ALFA won in the first edition, giving even more recognition to the brand inside and outside the Italies. Meanwhile, ALFA started to export cars to France and the Holy Roman Empire.

In 1931, three ALFAs were at the second edition of the Mille Miglia. One of those was piloted by the adventurous Lorena Mazzotti, only daughter of Lodovico Mazzotti and activist for female emancipation. At the end of the race, Lorena had a fatal crash while driving back in first place in the surroundings of Brescia. The 1931 Mille Miglia was won by a pilot from the Aragonese team Hispano-Helvetica, but he offered the cup to Lodovico Mazzotti. It is the only cup not won by an ALFA present at the ALFA Lorena Car Museum in Brescia. The brand was then renamed ALFA Lorena, in honor to Lodovico’s daughter, and since then the initially colorful brand’s badge is shaded black.

Lodovico died in 1933, at the age of 63. His son Franco inherited the firm and kept the sports luxury cars line-up. With the Second Great War, ALFA Lorena halted its production on private cars (like many other car manufacturers across Europe), and was converted to military industry, once again producing trucks and light armored cars for the Italian army.

Like most surviving car makers in Europe, ALFA Lorena restarted private car production after the Second Great War with pre-war models. Like several luxury brands, ALFA Lorena moved down-market in order to survive during the reconstruction years. Unlike other car makers such as Ti Frojta Motorverki or Volkswagen, ALFA Lorena didn’t launch a people’s car by the early 1950’s. The first new model since the 1930’s, the ALFA Lorena 4C Berlina, was the first four-cylinder car since the 1920’s but was still a small luxury car. Such a successful car permitted ALFA Lorena to remain in the up-market car scene and finance car racing.

The 1950’s represented a decade of expansion for ALFA Lorena. By 1955, the firm produced around 50 000 cars per year, much more than just over 1 000 made by late 1930’s. ALFA Lorena also once again produced top-market limited-edition luxury cars under famed Italian coachbuilders’ body shells with large six- or eight-cylinder engines, traditionally called the 6C and 8C models respectively. These started to be exported to the NAL-SLC, where they became successful competitors against English SS or German Mercedes-Benz sports cars. A second factory was built to increase production and exportation.

By the late 1950’s, ALFA Lorena’s line-up was rather confusing, consisting of 4C, 6C and 8C lines, each one having various versions and some rather exclusive with just a few hundred made. Sales in the NAL-SLC were responsible about half of the production when the Second Carquake occurred in 1958. Italy being a right-hand-driving country, ALFA Lorenas stopped being sold in the left-hand-driving NAL. Suddenly, ALFA Lorena was in deep trouble.

Thousands of cars were shipped back to Italy, but they weren’t sold in large enough numbers because they were not city cars and oil prices had increased as a consequence of the Suez Crisis. With this massive loss of profits, ALFA Lorena found itself unable to launch new smaller models to replace the expensive unsold ones. In 1960, it was forced to abandon car racing after 49 years of success, although many races were won by independent pilots driving ALFA Lorenas until the early 1970’s. The financial losses piled up, and the company finally bankrupted in 1962, leaving automotive enthusiasts in shock. The world had lost one of its most famous and remarkable car brands.

Intending to reach the luxury car market outside Japan, the Corean car manufacturer Hiendai bought the rights to ALFA Lorena's name and badges from the Mazzotti. It was a shock to the automotive press as a European brand so full of history came under Asian ownership. At the time, Hiendai was not widely perceived as a manufacturer deserving to own ALFA Lorena.

By the early 1990’s, the first ALFA Lorenas rolled off the production lines since 1962. Instead of being made in Brescia, they were now made in Corea simply to be sold abroad as captive exports, as they surpassed the Japanese restrictions for car size and engine displacement. At first, the Corean ALFA Lorenas were distrusted despite being much nicer than regular Hiendais (and Japanese cars in general); sales were slow and automotive press believed it was the flop of the decade. Part of Hiendai’s financial troubles during the 1990’s were thanks to this operation. Another Corean car maker, Kïa Motors, merged with Hiendai (in 1998) permitting an injection of capital. ALFA Lorena rather benefitted as a brand of the new Kïa-Hiendai Group, and the line-up was totally refreshed. In time, the once extinct brand was going strong and started to be recognized internationally. In 2011, the ALFA Lorena 4C Gran Turismo illustrated the North American Horseless car magazine cover in its Yearbook edition, which shows all car models under production throughout the world every year, an honor given for the first time to a Japanese car maker.

Nowadays ALFA Lorena is available in various markets around the world, but still not in Japan. It has enjoyed success in recent years, selling many more cars than in previous years.

The evolution of ALFA Lorena logo (only major changes shown)

Originally, ALFA’s logo was composed of a red square topped by the inscription ALFA in white. Inside the circle were two vertical halves with the same colors of the flag of Brescia (left white and right blue). The left side was emblazoned with a camunian rose (which is also seen on the national Lombard flag), while the right side was emblazoned with a lion rompant (representing the city of Brescia).

Over the decades, the logo underwent few changes, more related to proportions of both the lettering and the symbols inside the square. The only real change occurred in 1931, when the company was renamed ALFA Lorena (second name was added below) and the once colorful logo was shaded black in honour of Lorena Mazzotti (1903-1931).