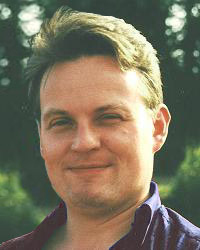 Żowan Sasomętany (Zhovan Sasomentany in world press) is the chair of North American Philology in the Philology Department at the University of Lodz. Sasomętany lives in Łódź with his wife Marzyna and their two children.

While Sasomętany's first interest is philological, he is an avid study of the often convoluted politics of North America. Having studied the recent war that resulted in the dissolution of Florida-Caribbea, Sasomętany was called upon by the Czywila Initiative to suggest an exit strategy for South Florida to the Sejm. This was not warmly received, but Sasomętany has gained some notoriety within the Republic of the Two Crowns.

He was a vocal opponent in the recent election of the General of the South Florida campaign.

As part of the Inicjaciwa Czywila (Civilian Initiative), Żowan served as spokesman, and was interviewed in Wita Warsinie[1]. In serving as spokesman, Sasomętany has garnered national attention within the RTC and the world at large. Żowan met with Ambassador Bunny of Louisianne in Bunny's research of the current political situation regarding South Florida.[2]

On August 8, 2006 he delivered a speech titled "We Can't Save the World With Banquets and Dinner Parties." There has been no official response. [3]

Rumors relating to Dual-Assassination of 2006

Żowan Sasomętany has recently been featured in a controversial novel[4] published simultaneously in the NAL, Louisianne and the RTC. This novel focuses on the aftermath of the assassination of Jean-François Young and the Empress Gacudai in the summer of 2006.

Retrieved from "http://ib.frath.net/w/%C5%BBowan_Sasom%C4%99tany"
Categories: Local Leaders | Persons from the RTC