Łódź is one of the largest cities in the Republic of the Two Crowns. Most of its fame it owes to the fact that Germany detoned a nuclear bomb there at the end of the Second Great War. This bombing was declared by Adolf von Hessler to be the "Masterstroke in the War of Destiny." It was this atrocity that brought an end to his Regime and eventually the war [1]. Had this horror not been perpetrated, Lodz would likely be a dirty industrial city of little international note. 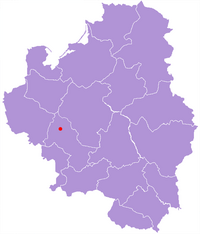 Map of the Republic of the Two Crowns with Łódź highlighted.

The first historical record of Łódź can be found in the records of the bishops of Urzelik giving them dominion of the village of Łodzia in 1332. In 1423 King Urzel V Jagiełło gave the rights of a city to Łódź. It remained a small town until the coming of the industrial revolution.

In the late 1700's Łódź was annexed by Prussia in the Second Venedic Partition but was reverted with the 1815 Congress of Vienna. From that time Łódź grew into a burgeoning city, its population doubling every ten years for the duration of the 1800's.

By the 1900's it had become one of the most densely populated industrial cities, with the population reaching a density of 13 280 people per square kilometre just prior to the First Great War. The phenomenal growth of Łódź stagnated during the first portion of the 20th century, maintaing a population near 400,000 persons. 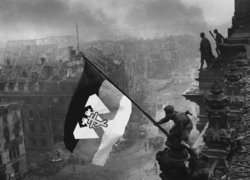 During the Second Great War, Łódź was over-run in a back-and-forth battle between the Holy Roman Empire and Russia, culminating in Adolf von Hessler's bombing of the city with our world's first nuclear weapon. Following the war, nearly 225,000 of the 400,000 persons living in Łódź had been killed, wounded, or moved away. 75,000 of the dead were attributed to Hessler's bomb, however this figure cannot be substantiated due to the destruction of records during the war.

Following the war, Łódź was a ghost-town, its 120,000 residents leading a meager existence until reconstruction began. It took Łódź many decades to recover from the war and bombing, however, in the last twenty years, the population has increased to over 776,000 persons in 2005. Currently, it is the third city of the RTC in size, after Warsina and Wileń. [2]

Aftermath of the Bombing

As part of the Holy Roman Empire's restitution for detonating the first nuclear fission device the Holy Roman Empire has funded in part the construction of a Łódź Peace Memorial. This memorial spans an area of 14 acres of the area that was decimated in the blast. Buildings that remained standing after the blast have been left erect as reminders of the horror that the nuclear device visited on Łódź's citizens.

There are many memorials to those affected by the radiation, and there are many submitted by the major nations of the world. As part of restitution, the Holy Roman Empire also supported the creation of the University of Łódź. Acts of the Holy Roman Empire's Diet have also funded expansions of the University's Humanities and Social Sciences departments. These were to show the intent of Germany to fund knowledge that could not be turned so easily to war.

While Łódź has remained a large industrial city, rebuilding from the time of Hessler's bomb, the city has diversified, and is home to one of the larger foreign language universities in the RTC. The University of Łódź has a student body hailing from all over Europe and North America. At least partially because of this diversity, the University of Łódź has earned a reputation as a "party school."

Despite the suggestion that it is a party school, the University of Łódź is among the more highly respected universities of the world and draws a very large number of study abroad students.